Concha: The Curious Dust-Up Between NY Times and Fox News

Concha: The Curious Dust-Up Between NY Times and Fox News 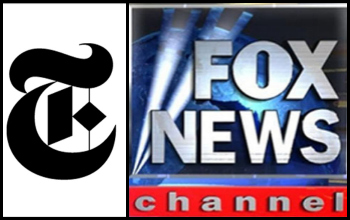 So New York Times Editorial Board member Jesse Wegman attacks Fox News as being a “welfare system” that only employs “unemployable jackasses”. Curious choice of words for someone in such an esteemed position as Mr. Wegman, as the NYT Editorial Board is considered the Bushwood Country Club of print journalism.

But think about it: If those words–particularly the “unemployable jackass” part–were used in one of Wegman’s columns, they wouldn’t see the light of day. Why? Because an editor would deem them beneath the standards of the Times. But on Twitter — as pointed out before in this space — there is no editor, no producer, no filter to weed out thoughts or words that simply don’t belong.

We’ve seen a ton of Tweeting-before-thinking from journalists and public figures of all stripes in the recent past. It’s almost guaranteed that someone — in this case, Wegman — will make him or herself the center of a story upon not realizing that Twitter is a megaphone to the world. Most Tweets go unnoticed, sure, and that’s what lulls many into believing those 140 characters will come and go unnoticed outside of followers/friends.

In the case of Wegman, there likely won’t be any consequences, at least none that anyone outside the walls of the New York Times will hear about, anyway. That’s because the target is Fox News, who has long sparred with the Times as one would expect, given their respective approaches to news and the influence each has in print and television, respectively.

Lies, Damned Lies, and Fox News was the title of an editorial by Paul Krugman just last year. Mr. Krugman appears on television often but has yet to debate anyone on Fox like a Bill O’Reilly, however. It’s a shame because that would make for some damn good TV. And former Times editor Bill Keller wrote an opinion piece called, Murdoch’s Pride Is America’s Poison, in which he called Fox “Murdoch’s most toxic legacy” (Murdoch also owns one of the two major tabloids in the Big Apple, The New York Post).

From the Fox side, O’Reilly has referred to Keller in the past as a “dishonest loon” and has referred to the paper on multiple occasions as “far left” (the paper hasn’t endorsed a Republican candidate for president since 1956, which means it even endorsed Walter Mondale in ’84, who only won his home state). And for years, Red Eye‘s special Times “correspondent” was aptly named Pinch (as in Arthur “Pinch” Sulzberger, the paper’s publisher), which was a rolled up newspaper puppet hilariously voiced by ex-panelist Bill Schulz. Old, elitist and utterly out of touch are the best ways to describe how Pinch was portrayed. Back to the case of Wegman, Fox’s Greta Van Susteren quickly returned fire (on her blog), calling Wegman a “dimwit.”

Looking even deeper into the Rice assault story, it’s amazing how every issue becomes left vs. right, and vice versa, these days, in terms of media narrative: Trayvon/Zimmerman, Ferguson, even the World Cup this summer somehow became a conservative vs. liberal thing. Now an All-Pro running back brutally knocks his then-fiancée unconscious in an Atlantic City elevator that happens to be equipped with cameras. It becomes the biggest story of the week so far. Everyone from MSNBC to CNN to Fox to ESPN features dozens of pundits weighing in with an opinion. Brian Kilmeade of Fox makes an ill-advised, unscripted quip, rightly takes heat for it, and the whole story veers off the partisan tracks from there.

Make no mistake: Ray Rice is the bad guy here. But the video makes his case is too open and shut and has no political angle, gives the usual suspects no evil boogeyman to demonize. Enter Kilmeade and NFL Commissioner Roger Goodell. Regarding the latter, the volume is amped up across the dial to 11 for him to resign because of an alleged cover-up (Goodell has now called on Former FBI Director Robert S. Mueller to conduct an independent investigation into the NFL’s handling of the Rice incident). Regarding the former, a member of the New York Times Editorial Board uses a very broad brush to paint the entire news organization Kilmeade works for as incompetent.

While all this is happening, the segments and editorials and tweets we should be seeing more of — the ones that analyze domestic violence and how to help those who are victims of it; they’re barely existent.

Per a riveting piece by the Boston Globe‘s Catherine Cloutier on Tuesday, using statistics from a 2011 survey by the Centers for Disease Control and Prevention:

One in every 6 women in the United States has been stalked during her lifetime.

One in every 5 women has been raped.

And 1 in every 4 women has been severely physically assaulted by an intimate partner.

[…][A]n estimated 19.3 percent of American women, or about 23.3 million, have been raped at some point during their lifetimes.

[…][A]bout 43.9 percent of women experienced other forms of sexual violence, such as sexual coercion, groping, or exposure.

We see a few conversations on cable news around these kind of sobering, stunning stats here and there. But since there isn’t a particular person (outside of Rice) to point the finger at, that rather important angle largely gets ignored.

Ray Rice is gone from the NFL for a long time, perhaps for good.

His story is basically done for now.