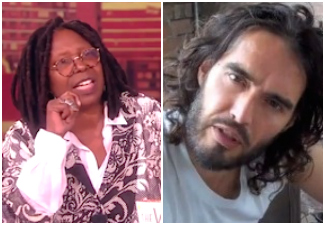 So I was watching this popular daytime show the other day. Not normally my thing, but with an eight-month-old baby girl taking her nap and Dad (me) playing the role of Manny for the day (apparently that’s what they now call Dad temporarily taking on the role of Mr. Mom these days), I was basically stuck with only a remote control to keep me entertained.

I wasn’t exactly paying close attention, but what I heard next actually shocked me (which is hard to do): a black guest was speaking to a white co-host about something controversial when the white host shot back: “Spoken like a true black guy.” Wait…what? Did I just hear that on national television? I tweeted about 9.8 seconds later that the unemployment line was about to get a little bit longer in New York… this host would be fired during the next commercial break.

Of course, this scenario didn’t actually happen. Except it did. With the race roles reversed. A black co-host (some refer to her as Whoopi) and a white guest (Will Cain of The Blaze and a CNN contributor) having that very exchange, except Cain–who wasn’t exactly confrontational when speaking of Russell Brand‘s patently idiotic comments about Fox News–wasn’t remotely playing the role of race-baiter.

Sure… a few in the friendly comments section below will say Brand was right on the money in his assessment. That’s all in the contract of being a blind ideologue. But know this: the patently idiotic characterization by Brand applies not because we’re talking about Fox News. The same would apply to anyone comparing CNN or MSNBC to a terrorist organization that has executed hundreds–perhaps thousands–of Iraqi civilians and troops… an army deemed somehow too extreme for the moderates running Al Qaeda… in its march to power. It’s a typical tactic of anyone making an over-the-top argument to make a larger point: Compare ’em to Hilter. Compare ’em to Stalin. Compare ’em to ISIS. If it’s heavy enough on the hyperbole front, you’ll bury your opponent. Or so the theory goes…

It’s a shame Brand has to resort to gutter arguments like this. As an entertainer–with the right script–he’s actually borderline genius in his performances. For those who read the column, you know I’m a movie buff. And in Brand’s case, two of his movies make my Top 20 underrated comedies of all-time (Forgetting Sarah Marshall at #19 and Get Him to the Greek with the almost-great Jonah Hill at #8). He has presence, perfect comedic timing and owns every scene, owns the screen. But in real life, as we ironically saw during his short-lived FX show (Fox-owned) BrandX, he doesn’t do impromptu political commentary very well. In short, his show (now cancelled) really, really sucked.

Back to Whoopi, it also is painful to criticize her given our common bond. Not for her magical turn in Ghost (and if you want to feel old, that flick came out 24 years ago). Instead, believe it or not (given the racial makeup of fans of the sport), Whoopi is a huge New Jersey Devils fan. Having a brother who once worked for the team in the 90s, so am I. Yup, I even met Ms. Goldberg briefly at a few Stanley Cup games back in the days when the team was winning them on a semi-regular basis (three in eight years between ’95 and ’03).

So when Whoopi makes these kind of statements, rest assured you’ll be hearing (if you haven’t already) or will be hearing that she should be reprimanded, suspended, even fired for exploiting the double standard around racial comments in the manner she did. But that’s not the way it works in 2014. Rest assured, Whoopi will be sitting at the head of The View table tomorrow, next week, next month… as she has for the past seven years.

Mr. Cain was respectful in making his point around words becoming the “most harmful thing we have in society.” Whether you agree with his overall perspective or not, how the conversation somehow became about race is only a question Whoopi can answer.

It’s where we are now in 2014. It all comes down to race. Those at the extreme ends of the spectrum know this, and the worst part is…they always seem the one with the megaphone, the studio microphone… claiming to represent the soul of America.

And all the while, those in charge of shows like The View let it all happen. It generates press. Social media lights up. YouTube views soar.

But in the process, the dialogue cheapens more. Sensible voices are shunned to the sidelines.

Extremists now own the conversation. It could be Brand, it could be non-fictional-fictional characters like Touré. It could be right-right wing talk show hosts like Michael Savage or so-called celebrities like Ted Nugent. Doesn’t matter.

Make it provocative. Make it headline-grabbing. The usual suspects will follow in tow.

Such is our media culture in the era of “evolving.”