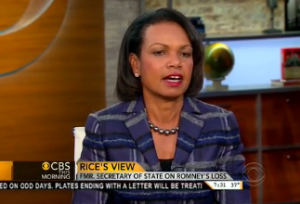 Former Secretary of State Condoleezza Rice made an appearance on CBS This Morning on Friday to reflect back the election, and the GOP’s campaigning leading up to it. Pointing to the country’s changing demographics, Rice cited the party’s need for “an even bigger tent.”

“Right now, for me the most powerful argument is that the changing demographics in the country really necessitates an even bigger tent for the Republican Party,” Rice said. She did, however, go on to note that many things the party stands for — “fiscal responsibility, a chance to educate your children in the way that you think best, the possibility of strong national defense” — are “broadly popular” with Americans.

“But when you look at the composition of the electorate,” she continued, “clearly we are losing important segments of that electorate and what we have to do is to appeal to those people not as identity groups but understanding that if you can get the identity issue out of the way then you can appeal on the broader issues that all Americans share a concern for.”

“But I think on the immigration issue, which I think turned out to be very important, and probably some issues about women too, some mixed messages were sent,” she said. “And when you send mixed messages, through the narrow funnels that is the media spotlight, sometimes people hear only one side.”