Condoleezza Rice Pushes For Intervention In Syria On CBS: ‘U.S. Doesn’t Have An Option Of No Action’ 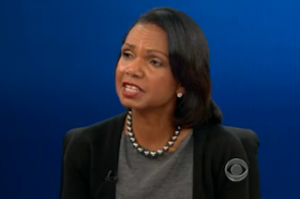 Former Secretary of State Condoleezza Rice made a strong push for U.S. intervention in Syria Monday evening in her relatively new role as a paid contributor for CBS News. Rice told CBS Evening News anchor Scott Pelley that the country has no option to “sit on the sidelines” when it comes to the Syrian conflict.

Rice echoed sentiments made by Senator John McCain (R-AZ), who recently returned from a secret trip to the region, when she suggested that a military no-fly zone would be a viable option to challenge Bashar al-Assad‘s regime. “There’s no doubt it’s time for the United States to make clear that it is going to engage in this effort to stop the difficult situation in Syria and to prevent its further spread,” she stated. “It’s already spreading across the region. So the United States doesn’t have an option of no action.”

Given the involvement of Iran, Hezbollah, Lebanon and Israel, Rice described the conflict as a “very serious situation” in which “the United States really doesn’t have an option to sit on the sidelines.” She added, “the United States of America has got to be present in this. No other country has the potential even to change the dynamics on the ground and to take the initiative in the region.”

As national security adviser in President George W. Bush‘s first term, Rice was instrumental in making the case for the invasion of Iraq based on the possibility that Saddam Hussein had weapons of mass destruction. She famously told CNN’s Wolf Blitzer in September 2002, “We don’t want the smoking gun to be a mushroom cloud.”