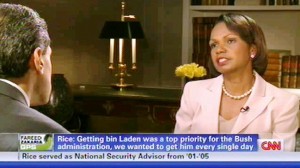 Former Secretary of State  Condoleezza Rice, followed up her smash-mouth Lawrence O’Donnell interview with a more cordial appearance on Sunday morning’s Fareed Zakaria GPS, and while she was far more gracious than former Bush Chief of Staff Andy Card (who accused President Obama of “pound(ing) his chest” over the Osama bin Laden slaying), she did repeatedly make it clear that people needed to know that Bush and co. loosened the jar on the bin Laden raid.

To her credit, Rice did credit President Obama for making “a brave decision,” and offered her congratulations.

However, in the brief interview, four of Ms. Rice’s seven responses involved the Bush administration’s share of credit for the measure of justice which was served to the terrorist leader, plus another (rightly) lauding Bush for his iconic remarks at Ground Zero on Sept. 15, 2001.

By contrast, she mentioned President Obama three times, most interestingly in her final response, which seemed to suggest Obama was just mopping up. Lauding Bush for the “very, very hard calls that frankly helped to set this up,” she allowed that “President Obama had to make some very difficult calls to bring it to conclusion.”

It is certainly in poor taste to leap upon the somewhat redemptive moment of Osama bin Laden’s death as an excuse to beat up on the Bush administration, and perhaps in Rice’s case, this is a defensive reaction, but it takes a certain amount of nerve to bang the “me, too” drum this hard. While the precise order and manner in which the dots were connected is still not known, and may never be, the Bush administration oversaw bin Laden’s preventable escape from Tora Bora, and for whatever reason, the trail grew cold enough under their watch that they shuttered the CIA’s bin Laden unit for several years.

By contrast, the raid on bin Laden’s compound in Pakistan was the fulfillment of a very early campaign promise, one for which he was roundly attacked, an indication that, had he not been elected, a different president might not have made this call. President Obama has also implemented a campaign of counter-terror that has actually seen him take flack from a former Bush adviser for killing too many terrorists.

As for the President “pounding his chest,” even Card admits it’s really nothing the President has said, or any of his costumes/banners,or even anything he’s done:

I thought his statement was subdued, but I think his schedule is not subdued. Personally, I think it is premature to go to Ground Zero, in New York.

Where does Card think he should have gone, straight into Baghdad?

It seems that no matter what Mr. Obama does, he will always be guilty of having the nerve to be President of the United States.