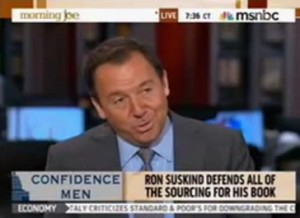 As The Washington Post reports this morning that several disputed quotes from Ron Suskind‘s Confidence Men: Wall Street, Washington, and the Education of a President were recorded on tape, the author appeared on MSNBC’s Morning Joe to defend his work against furious pushback from the White House. Host Joe Scarborough wondered what the White House was thinking with its denials, and Mika Brzezinski tried gamely to cross examine Suskind, which oddly paralleled the book’s complaints about the treatment of women. Embedded deep into the piece, though, was a factoid that could help explain why so many administration officials honestly feel they were given a raw deal by Suskind.

Unfortunately, Suskind helped the Washington Post scoop Morning Joe by allowing them to review audio of disputed quotes, so the early portion of the segment revolves around why the White House would make these denials, while knowing that there was audio of the disputed quotes.

There’s really no mystery here, though. It’s called damage control. Even knowing that the tapes will eventually come out, a denial on day one, followed by second and third lines of defense (“It was out of context,” “My blood sugar was low”) helps to blunt the impact of such a story as it enters the news cycle. There’s little downside to it, as you can simply say, “Oh, I didn’t remember saying that. My bad.”

Toward the end, though, co-host Mika Brzezinski tried to question Suskind about whether he had truly painted a balanced picture of the President’s record with women. She asked Suskind if he points out in the book that “there are more women in high-level positions than in any other administration,” or if he mentioned the Lily Ledbetter Act, or efforts to assist women with small businesses.

After Suskind got flummoxed by one of Mika’s questions, Joe Scarborough stepped in and said, “Hold on a second, Clarence Darrow!” and repeatedly interrupted her attempts to follow up.

When she asked Suskind if he got any dates or facts wrong in the book, Suskind responded, condescendingly, “In a 500-page book, I don’t know if you’ve written one of those…”

You can chalk this sort of behavior up to the jokey partisan vibe of Morning Joe, but its also the kind of thing that leads women to complain that, even when they’re admitted to a boys’ club, they’re still treated as second fiddles.

One key fact is revealed, in an onscreen graphic, but never discussed. Here’s the clip, from MSNBC’s Morning Joe:

According to Suskind, he has over 700 hours of interview material for his 500-page book. That means that the quotes in the book represent a smaller percentage of what was said to him than the amount of impurity in a bar of Ivory Soap. This is where the Obama administration may have an hoest gripe with Suskind. As a reporter, it is his job to decide which .66% of those quotes tell the real story, and it is with those judgments that an honest quarrel can be had.

It is in those judgments that the storytelling bias can seep through. Only Suskind knows for sure how many tales of harmony he left out of the book. That doesn’t make him wrong, by the way. Not only does conflict sell, it can also illustrate truths as surely as a box of wine.’

As a matter of fact, though, Suskind did include such a tale of harmony in the book that went unreported in the initial flurry to sell those conflicts. From today’s Washington Post:

“I said, ‘Look, I think that we have some issues with making people, particularly the new women, a part of the team and giving them a better sense of you and how you value their opinion,’?” Jarrett said, recalling her conversation with the president.

Obama convened the dinner with women on staff. It took place in the White House residence on the night of Nov. 5, 2009 — just hours after a shooting rampage at Fort Hood, Tex., dominated the president’s attention.

An official White House photo depicts Obama, his hand on his chin, listening intently as the women sit with serious expressions.

“I really want you guys to talk to me about this openly because recently there has been this suggestion that there are some issues here,” Obama said, according to Suskind’s account of the session. “I’d like to know how you guys feel.”

The dinners have continued ever since, though not with Obama. The women agreed it was not necessary to meet with him again, officials said. Jarrett described Obama’s responses that night as “empowering.”

Given Larry Summers’ history with women going into the Obama administration, it’s little wonder that such conflicts arose, or that Suskind would have kept a keen ear out for them. However, this goes beyond one man’s condescension. The truth is that, Democrat or Republican, political or not, women still often face an uphill climb in a world that, although changing, is still dominated by men.