Congrats, Hawks! A Plurality Now Supports Ground Troops Against ISIS
WHAT IS IT GOOD FOR? 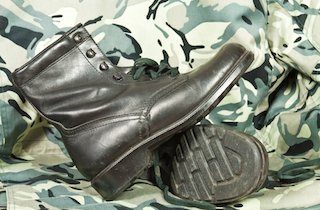 Congrats to Senators Lindsey Graham, John McCain, and Dianne Feinstein, Representatives Mike Rogers and Peter King, and select members of the Beltway media: the fearmongering worked! According to a new NBC News poll, a plurality of the American public now supports ground troops against ISIS.

Per NBC News, “45 percent are in favor of using [combat troops] if military commanders think they’re the best way to defeat the ISIS army, while 37 percent are opposed.” (It could have something to do with the fact that 72% told NBC they believe we’re going to send Americans into combat one way or the other.)

That’s quite a turnaround from a nation so recently wearied from two protracted military engagements and that balked at a limited incursion into Syria last year. Even three weeks ago a similar poll found 40% wanted military action against ISIS kept to airstrikes, while 34% supported boots on the ground.

RELATED: Dem Rep. to CNN: You Don’t Just Rush into Iraq Because Media Wants You To

What’s changed since then? Weeks of histrionic warnings of ISIS’ imminent threat to the U.S. homeland, featuring everything from tales that “Quran books” had been found along the U.S.-Mexico border, to concerns, never quite backed up, that U.S. fighters who joined ISIS could use their passports for reentry to the states, to Lindsey Graham’s warning that the regional terrorist group was actively planning something worse than 9/11.

Counterterrorism experts have roundly dismissed these fears as a “farce” containing no evidentiary backing. Sure enough, the “imminent” attacks on western subway systems discovered by Iraqi intelligence this week were dismissed by U.S. intelligence agencies.