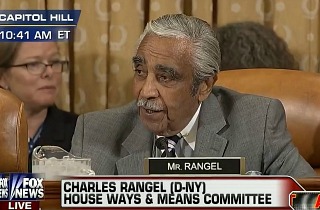 During Monday’s congressional hearing into the problems associated with the Affordable Care Act’s roll-out, Rep. Charlie Rangel (D-NY) attempted to make a political point about the Republican Party’s perfunctory opposition to the ACA. He insisted that Republicans oppose most any entitlement and all of them voted against the establishment of Social Security in the 1930s. Rangel was corrected by the GOP committee members, inspiring the laughs of the hearing attendees.

“You may wonder why the administration appears to be under such severe attack by some members of this committee, especially as it relates to our goal to provide health care for 30 million Americans that can’t afford or don’t have access to it,” Rangel began. “It should give you some small comfort to know that historically the Republican Party always fought vigorously against these type of programs.”

“I don’t think that one Republican voted for the Social Security Act even though those old enough enjoy the benefits,” Rangel insisted.

He was immediately corrected by the Republican members of that committee. “We’ll see,” Rangel said. “Maybe one or two, I don’t know.”

He went on to say that Republicans opposed Medicare and insisted that he had a conversation with President Lyndon Johnson about the number of Republicans opposing that entitlement before moving onto another topic.