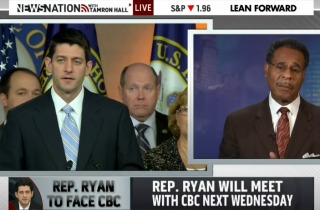 Rep. Emanuel Cleaver (D-MO), the former chairman of the Congressional Black Caucus, will welcome Rep. Paul Ryan (R-WI) next week for a meeting in which his caucus will discuss the issue of poverty with the House Budget Committee chairman. Appearing on MSNBC on Wednesday, Cleaver previewed an issue he will raise with Ryan about how his past statements reflect a seeming lack of racial consciousness.

MSNBC anchor Tamron Hall began by noting that Ryan took heat in March after he told a conservative radio host that part of the problem of poverty is due to a “tailspin of culture, in our inner cities in particular” in which inter-generational poverty is a feature of modern life.

Cleaver said that, while the meeting will be more “light than heat,” he said that Ryan’s comments on that program were even more problematic because he quoted economist and libertarian political scientist Charles Murray.

Cleaver said that Murray has been “pouring racist sewage into open ears for a couple generations now” and he has been “pushing his theories of the bell curve and white supremacy.”

Cleaver added that Ryan’s admission that he was unaware of the objections to Murray’s theories suggests “ignorance” on Ryan’s part. “If you know the least, you shouldn’t speak the loudest,” the Missouri representative added.

Cleaver went on to say that the term “inner city” is suggestive of race. “Chairman Ryan, I think, knows that,” he added. “If not, I think we’re going to have to create an atmosphere where he can learn things.”