Congressional Candidate Mia Love: President And His Supporters Are ‘Trying To Divide This Country’
Video

Congressional Candidate Mia Love: President And His Supporters Are ‘Trying To Divide This Country’ 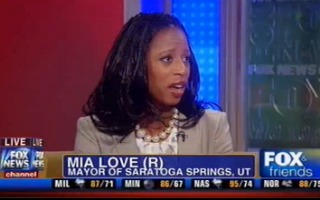 Saratoga Springs, Utah mayor Mia Love — a rising star within the Republican party — visited Fox & Friends‘s curvy couch Friday morning, where the congressional nominee (who is set to receive endorsements from the likes of House Speaker John Boehner and Senator John MccCain) discussed the numerous cuts she’s made and what this could mean for Washington.

Ultimately, she told the show’s host, the “best thing I could have done as Mayor is step out of the way and help businesses to thrive. And that’s what’s happening and I think Washington can take a lesson from that.”

Talking about the many cuts she’s made while Mayor, Love explained that some services have actually improved now that they’ve been put in the hands of citizens themselves. “We cut the civic events program and the funding for it, but we have a better program now because it is run on volunteers,” she said. “When you get the community involved, all of a sudden everybody wants to come to these events. We have a better run civic events program now than we ever had.”

“We’ve got a President and people who support the President that are completely trying to divide this country,” she said later. “And I think everyone has to get involved. We are going to have to role up our sleeves, because technically what we are doing is we are stealing from the future generations to pay for the present.”

Her Democratic opponent, she added is “a person who no longer puts Utah first,” adding that “we are concerned about the future of our children and we have to do something about it.”