Congressman Admits to Town Hall: It Would Be a ‘Dream Come True’ to Impeach Obama 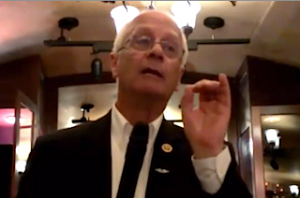 During a Republican meeting Monday, Rep. Kerry Bentivolio (R-MI) let it slip that it would be a “dream come true” for him to impeach President Obama. He stressed that he would first need some “evidence” of wrongdoing, but assured his audience that he has gone so far as to meet with lawyers to help him figure out how to obtain what he needs to make his “dream” a reality.

Answering a question from an attendee about what Congress is doing to stop Obama “from everything he’s doing against our Constitution,” Bentivolio said, “You know if I could write that bill and submit it, it would be a dream come true. I feel your pain and I know. I stood 12 feet away from that guy and listened to him and I couldn’t stand being there. But because he is president I have to respect the office. That’s my job as a congressman. I respect the office.”

“I went to my office and I’ve had lawyers come in,” Bentivolio continued. “These are lawyers, PhDs in history and I said ‘tell me how I can impeach the President of the United States.” But they advised him that he would first need some evidence.

“Until we have evidence,” Bentivolio said, “you’re going to become a laughing stock if you’ve submitted the bill to impeach the president because number one, you’ve got to convince the press. There are some people out there no matter what Obama does, he’s still the greatest president that they have ever had. That’s what you’re fighting.”