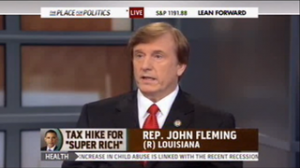 Republican Congressman John Fleming of Louisiana got himself caught out on an awkward limb this morning while talking class warfare with MSNBC’s Chris Jansing. When asked about the profit his businesses (Subway and UPS Store franchises) brought him in the past year, he offered that much of the $6.3 million is whittled away by taxes and operational costs, and “So by the time I feed my family, I have maybe $400,000 left over to invest.”

Jansing quickly points out that $400,000 is not exactly a modest amount. “Do you understand, Congressman, that the average person out there who is only making forty, fifty, sixty thousand dollars a year,” she chides, “when they hear that you only have $400,000 left over, it’s not exactly a sympathetic position.”

Without making any effort to demonstrate a tether to the reality of what he has, or what most Americans don’t have, he attempts to recover by suggesting — as Republicans are wont to do thesedays — that the president’s proposed tax increase for millionaires is class warfare. “This is all about creating jobs, Chris, this is not about attacking people who make certain incomes. You know in this country, most people feel that being successful in their businesses is a virtue, not a vice,” he argues fairly, but without addressing Jansing’s point that his experience is perhaps not representative of “the people’s,” and without any sense of responsibility to the system that allows people like him to prosper.