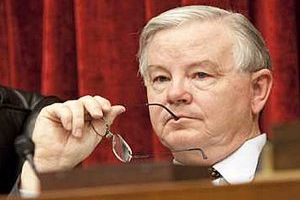 Sitting before Congress as if standing before a firing squad, it only took about five minutes of the House committee’s opening statements for BP CEO Tony Hayward to stop looking like the sort of man who has the will to live. But amid the barrage of scolding and stark reminders of his company’s negligence, someone threw Hayward a lifeboat: an apology.

Republican Congressman Joe Barton agreed with his colleagues that the disaster in the Gulf of Mexico was outrageous and required extensive investigation but, unlike Reps. Henry Waxman, Bart Stupak and company, he found some sympathy for the defeated man in front of him. Specifying that he spoke neither for Congress nor the Republican Party in saying it, Barton told Hayward he was “ashamed” and apologized for what he characterized as a “$20 billion shakedown” yesterday, referring to the escrow account President Obama agreed with Hayward BP would open for use exclusively for claims.

“I think it is a tragedy in the first proportion that a private corporation can be subjected to what I would characterize as a shakedown, in this case a $20 billion shakedown, with the attorney general of the United States, who is legitimately conducting a criminal investigation and has every right to do so to protect the American people, participating in what amounts to a $20 billion slush fund that’s unprecedented in our nation’s history, which has no legal standing, which I think sets a terrible precedent for our nation’s future.”

He also argued that, should he have asked Hayward for the same amount of money in a similar manner, he would have been arrested, and rightfully so.

Video from today’s Congressional hearings below: