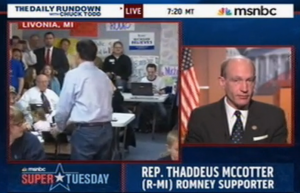 On Tuesday morning, MSNBC’s Chuck Todd had a little chat with Thaddeus McCotter, a Republican congressman from Michigan. McCotter himself had a short-lived bid for the presidency last summer, but was on the program to discuss Mitt Romney‘s campaign, in Michigan and overall.

After wishing Todd “Happy National Pancake Day,” McCotter proceeded to point out how Romney is in a bit of a pickle. Many have come out trying to be the “anti-Romney candidate,” he said, and Romney “in many ways is running against a perception that is difficult to get past, no matter what he does or doesn’t do.”

He also said he is concerned about the attitude the Republican candidates have had toward the auto industry’s bailout:

When it comes down to what’s happening in Michigan today, as a Republican, you can look at the primary, and they’re all on record being opposed to the auto industry bridge loans — which I trust that’s what president obama will call it — and doing that in the primaries. The concern many of us have is what’s going to happen in the general election. The president and his team were very smart about this. Even when I was running about my 15 minutes of lame for president, he was working in manufacturing places in Iowa.

McCotter went on to say that he opposes a brokered convention, and the GOP nominee should be one of the four candidates currently in the race:

As for the powerfuls — those people who got me out — I hate to see them go in there and pick a nominee not currently in the race. Every candidate looks great on the sidelines, and then when you put them in the game, on the field, you’re all going to get a little bit dirty.

McCotter himself is a Romney supporter, but said he is prepared to support any of the candidates.