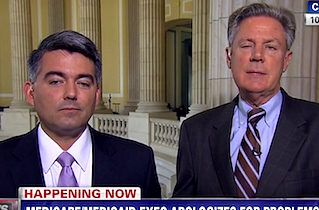 Representatives Cory Gardner (R-CO) and Frank Pallone (D-NJ) stood next to each other for a CNN segment on the House’s Affordable Care Act hearings Tuesday morning, but that didn’t mean they agreed. After Gardner claimed his individual insurance policy had been cancelled despite promises otherwise, Pallone—of Monkey Court fame—alleged insurance companies were using Obamacare as an excuse to cancel plans.

“I’m one of those Americans who got a letter [of cancellation],” Gardner said. “We have private insurance. We wanted to be in the same boat as all Coloradans. We have a private insurance policy in Colorado that was canceled. I got the same letter that millions of Americans are getting. I would like to hear why [President Barack Obama] told me I could keep it if I liked it, and yet it’s being canceled.”

“It’s not being canceled,” Pallone interjected. “That’s not true.”

“If your insurance is being canceled, it’s not because of the Affordable Care Act,” Pallone said. “The insurance company is not telling the truth!”