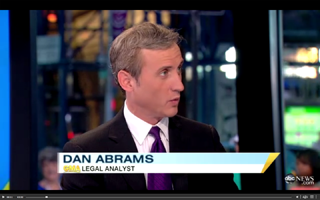 The trial of Conrad Murray continued yesterday with testimony from the Michael Jackson‘s head of security and personal assistant, recounting the scene at Neverland the day the star was found dead. The two described, in a consistent manner, according to Dan Abrams who ran down the day on Good Morning America earlier today, a frantic and suspicious scene. “Neither of them wanted [Murray] to go back into the house,” Abrams notes. “Remember, Michael Jackson just died, and this is what they are thinking about.”

A harrowing moment came when Jackson’s head of security Faleem Muhummad told jurors about the whimpering he heard in the hallway as Murray tried to revive Jackson. “I realized that his children were standing outside of his room,” he said. “Paris was on the ground balled up crying and Prince … was standing there … just slowly crying.”

Prosecutors say that they don’t think they’ll call the children to the stands during the trial, but the defense now thinks they might need to. “It’s very risky to call children to the stand and that’s, I think, why the prosecutors decided we’ve got enough people testifying about their reactions and the responses,” Abrams explains. “But now the defense is saying that we have some questions to ask.”

“That tells you the level of — I don’t want to call it desperation, but concern,” Abrams continued. “If they feel that they need to call one of the kids to testify what Dr. Murray was or wasn’t doing, I think that shows you a real need on the part of the defense.”

Abrams described yesterday’s witnesses recalling of the scene as consistent, with both men noting that Murray did not immediately make a 911 call, and that he did not seem to be in control of the scene. “Getting in the juror’s minds that this is a doctor who is focused on the dollars, as opposed to curing and helping and insuring Michael Jackson’s health,” said Abrams, “is a very important point that the prosecutors are using not overtly, but it’s coming in subtly.”

Today, another of Jackson’s body guards and a responding EMT will take to the stands. Will the defense catch up?

Watch Dan’s full take in the segment below: