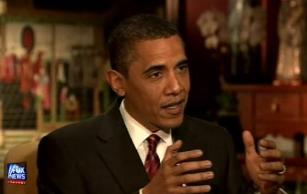 After all the back and forth between the White House and Fox News, Major Garrett (who described himself after the interview as a “conscientious objector” in the feud) sat down with Pres. Barack Obama earlier this week (as other networks did as well). Here’s how it went.

It started with a slight reference to the fact that Obama hadn’t been on Fox News in awhile:

Garrett: Mr. President, the Fox News Channel is very happy to see you. And behalf of the news channel let me wish you, Michelle, Sasha and Malia, a very happy and joyous 2009 holiday season.
Obama: That’s so nice. I appreciate it. To the Fox family, let me say the same.

Baier: After all the focus by this White House on Fox News, what were the atmospherics behind the scenes?
Garrett: Very calm, very rational, very relaxed. Look, I wasn’t going to litigate whatever it was that was going on between Fox and the Whie House, whether it was a war or not. I was always a conscientious objector in that conflict.

It’s not surprising that the 10 minute interview, that was part of a five-interview round robin by Pres. Obama, was “calm” behind the scenes, since it was right down to business between interviewer and interviewee. The “conscientious objector” comment was telling though – Garrett has continued to stay above the fray in whatever feud/war/conflict is going on between both sides.

As for the interview, it was fairly newsy. Garrett pushed Obama to answer a yes or no question about the Stupak amendment, which Obama eventually admitted he wouldn’t sign the bill with the amendment as is (“not yet” was the eventual comment). Also, Garrett asked about the time it’s taken to close Guantanamo Bay, and if it had been harder than he thought it would be during the campaign. “As hard. As usual in Washington, things move slower than I anticipated,” said Obama.

A true sign of just how news-making the interview was is where it got picked up by other outlets – ABC News White House correspondent Jake Tapper wrote a blog post about Pres. Obama’s GM answer (Tapper also sat down with Obama in the same round of interviews) (Tapper interviewed Obama before the Asia trip).

Finally – Garrett got a straight answer on the big story of this week – Sarah Palin. Would he read “Going Rogue”? “You know, I probably will not, but I wish her well,” said Obama. “You know, it looks like she’s going to do very well without my readership.”

This is likely the first step toward Obama appearing on a Fox News opinion program. It went well, and the back-and-forth was usual between White House correspondent and President. Will Obama be on The Factor in early 2010? If he has something he really needs to sell, he’ll likely find his way to the cable news leader.

One problem CBS News radio White House correspondent Mark Knoller had with the interview was the promotion of it. On Twitter yesterday he wrote: “‘Bite Me Award’ of the day to the Fox News promo dept trumpeting its Obama intvu: “only we ask the tough questions.” Puh-leese.

>>>NEXT PAGE: Watch the full interview.