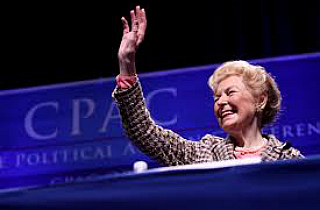 The Republican Party should ditch any attempts to reach out to the Hispanic vote and instead focus on courting more white voters. That’s the advice of longtime conservative activist Phyllis Schlafly.

While appearing this week on the Focus Today radio program, Schlafly told host Perry Atkinson that the recent attempts by the GOP to reach out to Hispanic voters through immigration reform constitutes a “great myth” because immigrants are unlikely to vote conservative anyway.

“The people the Republicans should reach out to are the white votes — the white voters who didn’t vote in the last election. There are millions of them. I think when you have an establishment-run nomination system, they give us a series of losers, which they’ve given us with Dole, McCain, and Romney and they give us people who don’t connect with the grassroots.”

This comes in stark contrast to the controversial Republican National Committee “autopsy” report which advised the party to attempt to reach out to minorities like Hispanic, black, and gay voters. Since the Romney electoral defeat, several conservative politicians and pundits have called for immigration reform as part of a strategy for winning over the Hispanic vote.

“The propagandists are leading us down the wrong path,” she concluded. “There is not any evidence at all that these Hispanics coming in from Mexico will vote Republican.”

Watch below, as clipped by Right Wing Watch: