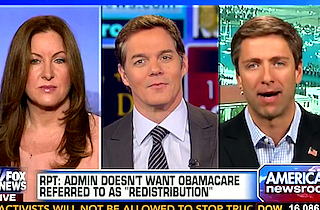 The comment came following a re-airing of a briefly-famous clip from the 2008 election, in which then-candidate Barack Obama told a man we’d soon come to know as Joe the Plumber that “when you spread the wealth around, it’s good for everybody.”

“Here’s the bottom line,” Slater said. “The ends do not justify the means. Martin Luther King, Jr. said you cannot achieve a moral end—helping people—through an immoral mean—taking from people. The left’s solution is always to take from people to help another group. That’s lazy!”

RELATED: I Have a Revisionist Dream: National Review Tries to Make Dr. King’s Speech an Ode to Conservatism

The quote is from “Letter From the Birmingham Jail,” and needless to say it doesn’t have the “taking from people” part.

Marshall made a disgusted noise when Slater invoked King, and was momentarily speechless after his comment.

“I think MLK would be rolling in his grave,” she replied. “If a child has cancer and they couldn’t get insurance, I don’t think that’s immoral, I think it’s quite the opposite to provide that.”

“Absolutely, redistribution is something Democrats believe in,” Marshall continued. “But the Affordable Care Act is not what redistribution. It’s about everyone having that opportunity and benefits for all.”