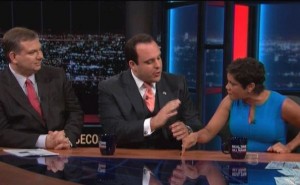 Maher pointed to the Brennan Center’s study, which noted that there was 10 in-person cases of voter fraud, while as many as 5 million would be disenfranchised by new voter ID laws. And they would primarily be black, Latino and young voters. Both Epshteyn and Fund pointed out that the Brennan Center isn’t quite their definition of an unbiased source.

The Department of Justice uncovered a “conspiracy” in the past that involved around 100,000 ballots, Fund argued. The largest voter fraud scheme in Chicago. Asked how often voter fraud actually occurs, Fund said we don’t know if we don’t ask for ID.

Yes, Maher said, they do ask for photo ID — to which Fund argued that such isn’t the case in Washington, DC. He later added that there are “two million dead people on the voter rolls.”

Where fraud does exist, Maher argued, is with voter registration. When someone writes down Mickey Mouse on the form — but Mickey Mouse doesn’t show up at the polling center.

“What’s the downside of policing it?” Epshteyn asked.

Taylor argued that they’re putting many additional layers between people and their constitutional right to vote. She further pointed out the recent report of voter registration forms being dumped, and the Republican party’s hiring an outreach firm that later faced fraud allegations. Fund agreed that that was wrong.

But, Taylor argued, the GOP in Virgina went on to hire the same people under a different name. To counter that, Fund asked whether Taylor publicly complained about ACORN in 2008, to which she replied she “absolutely did not.”

“If the people who didn’t get to vote were old and white instead of black and young,” Maher said, “you would switch…[on this position] so fast.”