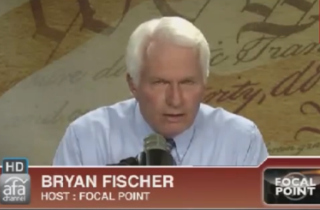 We haven’t brought you the incoherent, bigoted ramblings of right-wing radio host Bryan Fischer in a while, so here’s a little treat. On his show Tuesday afternoon, the American Family Association leader asserted that when the Founding Fathers protected the free expression of religion, via the First Amendment, they meant solely “Christianity,” and not all faiths.

Fischer’s thesis came in response to news that Satanists in Oklahoma have fought to gain equal representation during the holidays on statehouse public property. The state has every right to reject the group’s plea, Fischer said, because the relevant portion of the U.S. Constitution was not intended to protect any faith other than Christianity.

“At the time of the founding, 99.8 percent of the population of the colonies were Christians,” Fischer declared. “The other 0.2 percent were Jews.” And so the radio host believes that America’s founders “were thinking of Christianity,” and so “they weren’t providing any cover or shelter for the free exercise of Islam or even Judaism or even atheism.”

“They weren’t saying you can’t do it,” he clarified, “they weren’t prohibiting that, they were just saying that is not what we are talking about here.”