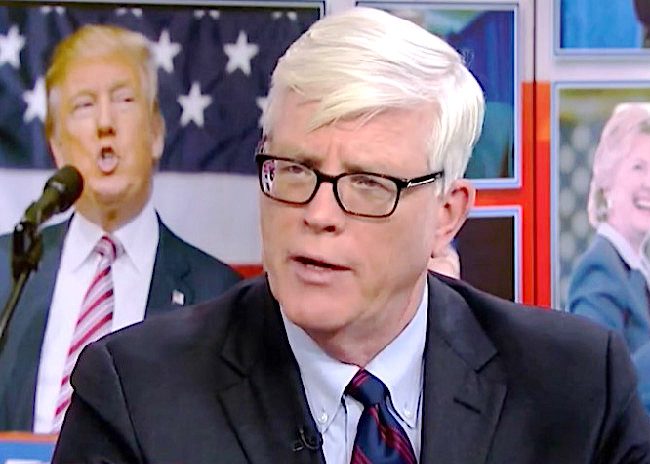 Today MSNBC announced that Nicolle Wallace––former McCain-Palin ’08 senior advisor and current NBC News political analyst––will be hosting a new 4 pm weekday show on the network. And now it appears conservative radio host Hugh Hewitt may be next up for a hosting position.

Hewitt, an MSNBC political analyst, has not only appeared on the network for a while now, but he has made appearances on Meet the Press panels in the last few months.

Yashar Ali reports for New York Magazine that the liberal network is in talks with Hewitt for a program that would air on “weekend evenings.”

Wallace’s 4 pm program and Hewitt’s reported show will be in addition to Morning Joe––Joe Scarborough being a former Republican congressman––and Greta Van Susteren––formerly of Fox News––in providing analysis that won’t exactly win over all of MSNBC’s liberal audience.

And yes, if you’re wondering, the New York Magazine report does contain behind-the-scenes information about how some at the network have been apparently taking these changes:

Some staff are worried that NBC News chairman Andy Lack is leading the cable network in a more conservative direction. At an NBC News town hall after the election, Lack said that the organization should be focused on appealing to America’s heartland, according to people at the meeting. The remark was widely seen as a directive to, as one source put it, “focus on Trump voters”… Van Susteren’s hire was not well-received internally at MSNBC, with Chris Matthews being especially frustrated by the decision, according to two network sources.

Hewitt––whose position on Trump went back and forth during the campaign––has a piece in the Washington Post today headlined “Trump’s first 100 days give conservatives a lot to celebrate.”