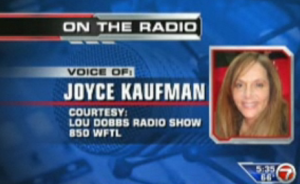 When conservative Florida radio host Joyce Kaufman went to a Tea Party rally on July 4, she got so fired-up that she was moved to make a fairly incendiary statement: “If ballots don’t work, bullets will.” Kaufman’s statement was caught on camera and shown on The Rachel Maddow Show—and ironically, it inspired people who don’t agree with her to threaten violence in response. As a result, Kaufman has announced that she will no longer be serving as Republican Rep.-elect Allen West‘s Chief of Staff.

Kaufman is responding specifically to a major lockdown that affected schools, libraries, and other government buildings in her town Wednesday. The lockdown was a response to a threat made by someone who said he or she was specifically upset about Kaufman’s remark. Florida’s WSVN News has the story:

As a result of the investigation into a threat that lead to the lockdown of all schools in Broward County, Wednesday, Joyce Kaufman announced on her WFTL radio show, the following day, that she will step down as Chief of Staff to Republican U.S. Rep.-elect Allen West. “Last night, I called congressman-elect Allen West, and I told him I would not be able to accept the position of chief of staff for Congressional District 22,” she said.

According to sources, something Kaufman had said at a tea party rally, set someone off to write a threatening email to that station, early Wednesday morning. During that rally Kaufman said, “If ballots don’t work, bullets will.” MSNBC aired the clip on Rachel Maddow’s TV show, where Maddow offered to introduce viewers to the new crop of conservatives entering office as a result of the Nov. 2 elections….

Police said that soon after MSNBC aired the clip featuring Kaufman, WFTL received an email that stated, in part: “I’m planning something big around the government building here in Broward County, maybe a post office, maybe even a school.”

Kaufman will keep her position as a radio host, and also continue to travel with a bodyguard until she stops receiving death threats, she says. Sorry to get your days started off with such a bummer of a story.