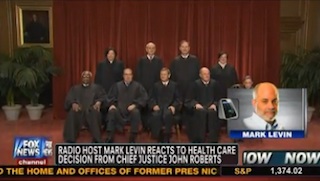 The Supreme Court ruling on the Affordable Care Act was about a bazillion years ago. However, some people are still angry about it. Shockingly (SHOCKINGLY!!!), the man who once wrote a book called “Men in Black: How the Supreme Court Is Destroying America“ is one of them. That man, of course, is conservative radio host Mark Levin. Levin is furious at the recent CBS News report that Chief Justice John Roberts may have been swayed by the media. Levin is so furious at this kind of media tomfoolery that he went on Fox News (where’s he’s appeared a few times the past couple days) and called for Roberts to lose his job.

Shockingly (SHOCKINGLY!!!), it would appear that some media pressure is better than others.

Levin called in to talk to Megyn Kelly to lash out at Roberts and the Supreme Court. He began by mocking conservatives who were attempting to see a “silver lining” in the ruling, claiming that they were “blinded by their silliness.” He then argued that it was time to instate term limits for federal judges.

“What we lack, Megyn, in too many public officials — and that would included judges and justices, not all but too many — is virtue, integrity, prudence. And, over time, they become cynical, they become deceitful, and their view of our constitutional system collapses. And one way to try to address this is to ensure that there’s more opportunity for other great people, brilliant lawyers, judges, and so forth to step up to the plate and have an honest opportunity to participate in the governance of this country.”

Kelly pointed out that the reason justices have terms for life is so that they aren’t able to be swayed by the political election process. However, they both agreed the CBS report calls into question whether or not that worked.

Still, as Levin began dissecting Roberts, theorizing about his motivations and quoting from years old comments he made, Kelly cut in.

“I’ve been saying publicly, as somebody who practiced law for a number of years and covered the high court for a few, I always get uncomfortable when people go after the justices after their rulings.”

Levin replied that he only goes “after justices by name,” when “justices by name come after us.” He then said that he would “sound like an idiot” if he only talked about “the Court” when it’s clearly Roberts’ fault.

Too true. The only way to sound smart is to use the conservative media to pressure justices to not being pressured by the liberal media.