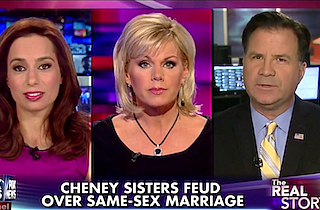 “It’s sad Liz Cheney’s sister has chosen to make this a public fight,” Larson said, “to damage her political ambitions, and to do it in a way that doesn’t respect Liz Cheney’s personal beliefs and personal values. We hear a lot about personal values from the left, and yet it sounds like, as far as the gay agenda goes, it’s take no prisoners and yes is the only answer, and if you don’t agree we’ll do everything we can to hurt you.”

“I don’t know what the gay agenda is,” guest Julie Roginsky said. “But if she were so offended by the concept of gay marriage, she shouldn’t have gone to her sister’s wedding. But she did. She apparently claimed she was very happy for her sister Mary. To now come out and say publicly she’s opposed to her sister’s marriage seems like a political ploy.”

“That’s not what she said,” Larson objected. (Carlson disagreed.) “There’s a difference between saying I disagree with homosexual marriage—which I disagree with—and saying that I oppose your marriage. There’s a gigantic difference there, and you’re not accepting it. When I speak of the gay agenda I mean there are homosexuals in this country who say, ‘We demand that you not just tolerate, not just accept, but that you endorse what we’ve done.’ A lot of Americans don’t endorse it. Those people have a right to do it.”