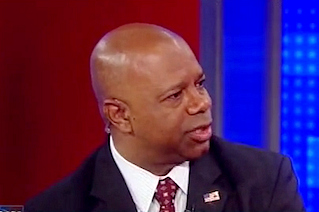 Tea Party radio host David Webb appeared on Fox and Friends Sunday morning to discuss the response to the George Zimmerman acquittal, especially the NAACP’s plan to petition the Department of Justice into pursuing civil rights violations against Zimmerman, which he said furthered the racially-fueled politicization of a legal matter.

“This isn’t a racial case,” Webb told co-host Tucker Carlson. “It was made a racial case. You know, not even limited to the president. What that is, that’s the nation’s largest microphone. It’s the President of the United States. Al Sharpton, Jesse Jackson, all of those, the actions of Benjamin Crump, initially, they all play into this. Roslyn Brock from the NAACP—who by the way, at their meeting this morning, the chatter at breakfast is there’s now 100,000 signatures on the DOJ petition. Well, the petition’s great for raising the roof, if you will, on what they want.”

“But in reality—where is the Justice Department and their actions on this?” Webb asked, before pushing a theory making the conservative rounds in the past few days that the Department of Justice aided anti-Zimmerman rallies in the early days of the case. “They have a conflict now. Their Community Relations Unit…went down there and spent money, taxpayer dollars, to fund rallies or facilitate rallies against Zimmerman. That’s picking a side.”

“Now the DOJ should really be looking inside and saying, ‘Are we doing the right thing?’ Will [Eric] Holder do that? I doubt it. Let’s see how he acts with the New Black Panther Party on this.”

RELATED: Attorney Mark O’Mara: ‘If George Zimmerman Was Black, He Would Never Have Been Charged With A Crime’

“I want to go to the American people on this,” Webb said. “It’s time for us to say, no, Tucker, to all of us, to say no to this kind of no to demagoguery, race baiting.

“Our system is not perfect. But it is a very good justice system. We have redress. We have appeals. We have a process in this country to address issues when we feel we’re wronged and we haven’t gotten justice. That’s what we need to do. We need to reject them, outright, vocally, at work, in your communities, in your churches, say: the system has played a role. The jury of his peers has made a decision. And, frankly, to riot as they did in Oakland against a jury decision is also to go against freedom and what this country is about.”