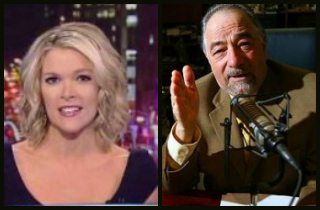 Conservative radio host Michael Savage is a very competitive man. He made that very clear multiple times during his radio show Tuesday night while comparing himself to other talk stars Sean Hannity and Rush Limbaugh. He saved some of his most bizarre (and perhaps sexist) criticisms, however, for new Fox primetime host Megyn Kelly.

Kelly’s show The Kelly File airs during the 9 p.m. ET hour, overlapping with Savage’s radio show (until he moves to 3 p.m. in January). So while he spoke about current affairs and his male radio competitors, Savage occasionally looked up at the TV and spotted Kelly anchoring her new show. Those moments were when he decided to dump on her and her new program.

“I can’t take Megyn Kelly,” he said before seemingly putting her down as a female anchor: “She’s got the nail file report on opposite me now. She’ll do well, though. Once I leave this slot, she’ll soar.”

Later on, he jokingly — and seemingly out-of-nowhere — discussed her physical appearance: “I admit that my legs are not as good as Megyn Kelly’s, and I must tell you that my hair is not as good, but I beat her in many other departments: I have a better beard than she does; I don’t have to use Nair. Uh, I have better eyebrows than Megyn Kelly’s.”

Taking a moment to identify what she was covering at the moment, Savage noticed it was about an immigration rally. “Oh, that’s so yesterday! Immigration rally. I covered it yesterday,” he said before suggesting Kelly’s been copying him. “The story I covered on the shooting of the woman — the execution — was on her show last night, so in other words, her staff is using my show for show prep.”

-RELATED: Can You Believe It’s Been 10 Whole Years Since This Happened On MSNBC? (VIDEO)

With that theory in mind, Savage plotted to sabotage her: “I have to decide what to use that’ll ruin her show tomorrow.”

And then about half-an-hour later, the radio host brought up Kelly’s debut night ratings, focusing exclusively on her loss in the 25-54 demo to MSNBC’s Rachel Maddow (Kelly also happened to dominate in total viewership). “She was terrible last night!” he said.

Ultimately, Savage concluded (again with hints of sexism), Kelly will need to use her sexuality to improve ratings and revenues for Fox News:

“I think what Kelly’s going to have to do is she’ll have to talk to Roger [Ailes] about adding special features on her website in order to build audience and revenue for the News Corporation. It’ll be like ‘See Megyn pluck her eyebrows for an extra 25 cents.’ ‘For only 35 cents more per month, watch Megyn apply makeup.’ ‘For 29 cents a month, see Megyn curl her hair.’ You know, they could do a lot with a woman.”

Listen to the above comments, clipped together below: