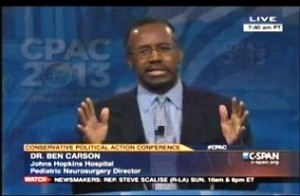 Dr. Ben Carson wowed the crowd at CPAC with a thoughtful speech that mixed tidbits about neuroscience with current politics and policy and in the process managed to firmly cement his position as a conservative darling. Carson drew a loud and sustained applause when he said toyed with the crowd about a possible 2016 crowd.

Carson rocketed to superstardom in conservative circles after lecturing President Obama during the National Prayer Breakfast in February . He further raised his profile among the conservatives by making the rounds on numerous right-leaning media shows and being ridiculed on some left-leaning programs.

During his speech 22 minute speech the neurosurgeon focused on what he called “common sense” and “logic” in today’s political world and implored not just conservatives but liberals, too, to use it everyday. Carson hit on religious themes while frequently circling back to the prayer breakfast that put him on the radar of national conservatives.

“This is a country for, of, and by the people not for, of, and by the government. If we turn it over to them we cannot complain about what they’re doing because this is a natural course of men and we have to hold their feet to the fire,” Carson said.

Carson’s biggest moment came when he hinted at what it would be like to be president.

“Let’s just say you magically put me in the White House,” he said, eliciting a roar of cheers and long applause from the crowd.

“I take it back,” he said, before going on to explain how he thinks Obama is destroyin the nation by dividing the nation and pitting people against each other.

Watch clip below via CSPAN