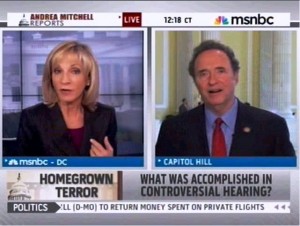 Rep. Peter King’s (R-NY) congressional hearings on radical Muslims in America have sparked a good deal of controversy, and a lot of compelling video. The latest example is an Andrea Mitchell clip that’s zipping around the conservative blogosphere with headlines like “MSNBC‘s Andrea Mitchell ’You and I Are Both White‘ We Don’t Get This Whole Getting Offended Thing Like Muslims Do.”

The knocks on Mitchell-ranging from “bigotry” to ignorance of the existence of white Muslims-rely on an omission of crucial context.

While interviewing Rep. Dan Lungren (R-CA) about King’s hearings, Mitchell specifically asked the congressman about a statement by the Tri-Caucus (which is made up of three minority caucuses), denouncing the hearings: (from MSNBC)

Mitchell isn’t saying that white people can’t empathize, or that there are no white Muslims, or anything of the sort. She was asking about a statement that denounced the hearings as reinforcing prejudices against a minority community.

Here’s how Newsbusters introduced the clip:

MSNBC host Andrea Mitchell on Thursday brought the specter of bigotry into Representative Peter King’s hearings on the threat of radical Islam in America. While interviewing Congressman Dan Lungren of California she awkwardly hinted, “Well, you know, you and I are both white.”

The irritated Republican wondered, “What does that mean?” Mitchell lectured, “I’m just asking, get in their heads for a second and try to think about how it is to be a Muslim-American facing these kinds- this kind of testimony today. That’s all I want to know.”

Much later in the piece, they reveal the crucial bit of missing context:

MITCHELL: Well, you know, you and I are both white. Let me just pitch to you-

LUNGREN(sic)(this quote is actually MITCHELL): Well, let me finish my question. Let me finish my question. The minority caucuses, the Asian Pacific caucus, the black caucus, the Hispanic caucus have joined together and issued a statement today after this hearing started, criticizing it. I’m just asking you, from their perspective- and you saw Congressman Ellison, your colleague, breaking down in his testimony today about what happened when that first responder, a Muslim-American young man was criticized after his death on 9/11 as a rescuer and was unfairly criticized as some sort of a radical. I’m just asking, get in their heads for a second and try to think about how it is to be a Muslim-American facing these kinds- this kind of testimony today. That’s all I want to know.

There are fair criticisms to be made here-Mitchell’s question doesn’t really lead anywhere, and she seems completely unprepared for Lungren’s response-but she’s not guilty of “bigotry,” or anti-whiteness, or whatever it is that’s causing all of this conservative apoplexy. This is not the Holy Grail of “reverse racism” you’re looking for.