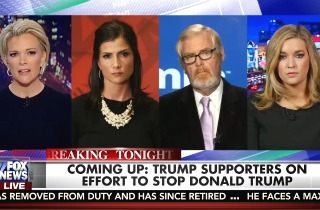 The conservative writer who organized the big anti-Donald Trump manifesto out tonight, along with three of the writers who signed on, appeared on Fox News to explain why they do not want Trump as president and do not think he is a great vessel for conservative values.

Lowry told Megyn Kelly this isn’t the establishment turning on Trump, because now it appears the establishment is starting to warm up to him. He declared that Trump “doesn’t truly understand the ideas and principles that make this country great,” and rejected Trump comparing himself to Ronald Reagan on the grounds that Reagan “didn’t just show up one day” and suddenly say he was a Republican.

Loesch, Bozell, and Pavlich then joined Kelly, and they all were equally harsh on Trump. Loesch said this is about “principles over popularity,” Bozell said Trump has done pretty much nothing for the conservative movement, and Pavlich said Trump continues to “espouse liberal ideas” on the campaign trail.

Bozell even went so far as to say “a President Trump would be a terrible face of America to the world” because of how narcissistic he is.

Loesch also pushed back on the idea that this is the “establishment” ganging up on Trump, bringing up just how unprincipled of a true conservative Trump really is.

Watch the entire segment above, via Fox News.