Conservatives Celebrate Olympic Failure, Maddow Asks ‘What Happened to You?’ 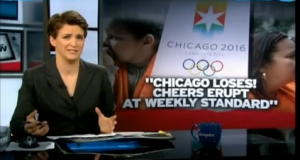 Maddow wagged her finger at The Drudge Report, pundit Michelle Malkin, Rush Limbaugh, Glenn Beck and The Weekly Standard among others for celebrating Chicago’s first-round elimination along with Madrid and Tokyo. She criticized conservatives specifically for framing the failed bid as a strike against President Obama and for just turning the bid into a partisan issue, period.

Maddow also reported that a tweet by The Weekly Standard about the failed bid linked to an article that said that the magazine’s offices erupted in applause at the news. But the linked-to article says such no such thing. Instead John McCormack‘s post for The Standard reads:

As a citizen of the world who believes that No one nation can or should try to dominate another nation, I’m glad that the Obama White House’s jingoist rhetoric and attempt to pay back Chicago cronies at the expense of undermining our relationships with our allies failed.

Still pretty out-there for a post about a failed Olympic bid. But did The Weekly Standard have second thoughts about the post and change their copy, or did Maddow fumble her facts?