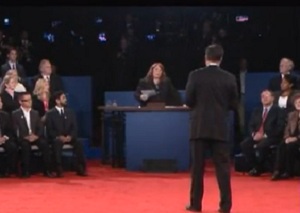 In the real world, on Tuesday night, just as President Obama had finished shaming Mitt Romney over his crass politicization of the attack in Benghazi, Libya, the former Massachusetts Governor compounded that shame by making an enormous blunder. In right-wing world, debate moderator Candy Crowley overstepped her bounds by correcting Romney in real time, only to later “admit” that Romney was right all along. Candy Crowley did everything she could to get Romney out of the jam he created for himself, but rather than just say “thank you,” conservatives want to erase the truth.

Here’s what really happened. President Obama excoriated Mitt Romney, to his face, for trying to score points off of the tragedy. He said:

The day after the attack, governor, I stood in the Rose Garden and I told the American people in the world that we are going to find out exactly what happened. That this was an act of terror and I also said that we’re going to hunt down those who committed this crime.

And then a few days later, I was there greeting the caskets coming into Andrews Air Force Base and grieving with the families.

Romney then thought he had caught the President in a lie, and tried to move in for the kill:

ROMNEY: I — I think interesting the president just said something which — which is that on the day after the attack he went into the Rose Garden and said that this was an act of terror.

OBAMA: That’s what I said.

ROMNEY: You said in the Rose Garden the day after the attack, it was an act of terror.

It was not a spontaneous demonstration, is that what you’re saying?

ROMNEY: I want to make sure we get that for the record because it took the president 14 days before he called the attack in Benghazi an act of terror.

OBAMA: Get the transcript.

OBAMA: Can you say that a little louder, Candy?

CROWLEY: He — he did call it an act of terror.

This is a verifiable thing, and all Candy Crowley did was prevent Romney from suffering further embarrassment by pursuing this line of questioning. Since then, some have suggested that the “acts of terror” reference was about the attacks of 9/11/2001, which only works if you paraphrase those remarks, instead of using the actual transcript, in which the President places the Benghazi attack into context with other terrorist attacks:

Of course, yesterday was already a painful day for our nation as we marked the solemn memory of the 9/11 attacks. We mourned with the families who were lost on that day. I visited the graves of troops who made the ultimate sacrifice in Iraq and Afghanistan at the hallowed grounds of Arlington Cemetery, and had the opportunity to say thank you and visit some of our wounded warriors at Walter Reed. And then last night, we learned the news of this attack in Benghazi.

As Americans, let us never, ever forget that our freedom is only sustained because there are people who are willing to fight for it, to stand up for it, and in some cases, lay down their lives for it. Our country is only as strong as the character of our people and the service of those both civilian and military who represent us around the globe.

No acts of terror will ever shake the resolve of this great nation, alter that character, or eclipse the light of the values that we stand for. Today we mourn four more Americans who represent the very best of the United States of America. We will not waver in our commitment to see that justice is done for this terrible act. And make no mistake, justice will be done.

So, it is a lie that President Obama wasn’t talking about Benghazi. More than that, though, this dishonest parsing only further reveals the sick emptiness of politicking on this issue, in contrast to the President’s heartfelt remarks. The President actually made a similar reference in another speech that day:

As for the ones we lost last night:  I want to assure you, we will bring their killers to justice.  (Applause.)  And we want to send a message all around the world — anybody who would do us harm:  No act of terror will dim the light of the values that we proudly shine on the rest of the world, and no act of violence will shake the resolve of the United States of America.  (Applause.)

Now, the fact that the President called the Benghazi attack an “act of terror” (twice) is not mutually exclusive to the fact that the administration also pushed the protest narrative longer than, perhaps, it should have. It does mean tha Mitt Romney was very, very wrong, and Candy Crowley stopped him from digging the knife in deeper.

But she didn’t stop there. While liberals have given her a pass because the moment was so bad for Romney, Crowley followed her factual reading of that Rose Garden remark by trying to help Romney score a point he wasn’t trying to make:

CROWLEY: He — he did call it an act of terror. It did as well take — it did as well take two weeks or so for the whole idea there being a riot out there about this tape to come out. You are correct about that.

Reading back a quote from a transcript is, as Crowley later explained, just a good way to keep the conversation going. Her umpiring in Romney’s favor, if anything, overstepped her role, as did her declaration that Romney was “right in the main.” He was wrong about one thing, and factually correct about another thing, but saying he was “right” about anything was an editorial overreach. On balance, her performance as moderator was excellent, though, so such a lapse can be forgiven. She really ought to clarify, though, that even though Romney’s narrow claim about the “spontaneous demonstrations” is correct, his overall point is much more complicated and fraught.

Any way you look at it, the Obama administration stuck with the protest angle longer than they should have, but there are perfectly reasonable, if not necessarily positive, explanations for that. The least likely of these is that anyone thought an event witnessed by so many could be “covered up.”

The President’s response, that he will do everything he can to find out what happened and bring the perpetrator to justice, was the correct one. The point he made in excoriating Romney was that, whatever the flaws in his administration’s response, the President has earned the benefit of the doubt that this wasn’t done maliciously or crassly, or with campaign politics in mind. That Romney and company still seek to eke out a free-throw over it only brings that point into sharper relief.

Here’s the exchange in question, again, from Fox News: