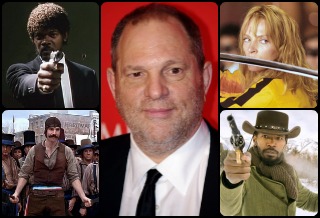 This week, producer Harvey Weinstein said something he knew would be controversial. “I shouldn’t say this,” he admitted, before telling Howard Stern that he plans to make a film that will make the NRA “wish they weren’t alive after I’m done with them.” The backlash has been just as strong as the producer expected, but really, those who are accusing Weinstein of “hypocrisy” should welcome his transition from producing violent films to directing one that confronts violence head-on.

The general tactic used by gun rights activists since Weinstein made his unofficial announcement about the film on Wednesday has been to list the many gratuitously violent films he has brought to the screen over the course of his 30-plus years as one of Hollywood’s most prolific producers. Think Pulp Fiction, Scream and Gangs of New York. Sure, he also produced high-minded, non-violent Oscar-winning films like Shakespeare in Love, The Artist and The King’s Speech, but it’s easy to ignore those when you’re trying to make a point about how immoral he is. To drive that point home, Fox News’ Greta Van Susteren presented a montage of the nastiest clips to her viewers Thursday night:

What Van Susteren and Sen. Ted Cruz (R-TX), along with Fox’s Martha MacCallum and her guest Mike Slater are essentially saying is that it’s “hypocritical” for Weinstein to spend so many years producing violent films and then all of a sudden decide it’s time to make one that criticizes gun violence. A large part of their premise hinges on the fact that they believe movie violence breeds real-life violence and that the mentally-ill people who commit mass shootings are somehow only imitating what they see in theaters or experience in video games. If that were the case, shouldn’t they be applauding Weinstein’s decision to change his ways and make a film that addresses gun violence at its core?

In an interview with CNN’s Piers Morgan that is set to air Friday night, Weinstein is expected to announce that he “won’t make any more movies glamorizing guns.” Referring to the mass shootings this country has faced over the last couple of years, he told Morgan, “As much as I want to ignore it, as much as I want to go on with my regular life, I just can’t shake it this time.” If these conservative critics think Weinstein’s violent movies are so terrible, they should want to see every filmmaker stand up and say the same thing.

We saw a similar cultural disconnect happen last year when actor Jim Carrey announced he would not be promoting his film Kick-Ass 2 because he could not in good conscience “support that level of violence.” As the many conservatives who savaged Carrey for his decision noted, that did not seem to bother him when he was filming the movie. Like Weinstein, it was an event like the Sandy Hook Elementary School shooting, which happened between the time that Carrey worked on Kick-Ass 2 and when it was released, that made him rethink his professional choices. Again, why wouldn’t conservatives who dislike movie violence stand up and say, “Good for him”?

To make something clear, I am not one of those people who think movie violence begets real violence. I tend to give Americans the benefit of the doubt that they can differentiate between escapist fiction and actual reality. And I believe that there is something other than entertainment driving mentally ill people who manage to get their hands on guns to go out and kill. For that reason, I would actually be disappointed if Weinstein stops working with Quentin Tarantino, for example.

But if you do believe that movie violence is a terrible scourge on this country, as many of Weinstein’s critics appear to believe, then you are not being honest by simply calling him a “hypocrite” and dismissing what he’s trying to do. As Weinstein said in his interview with Morgan, he does think there are some reasons, like hunting, that people should have access to firearms. But like many Americans, he thinks this country’s gun culture is out of control and wants to do something about the only way he knows how.

Last March, when the memory of the Newtown shooting was already starting to fade and congressional action on gun control appeared less and less likely, Michael Moore, who has brought most of his documentaries to the screen with Weinstein’s help, proposed releasing the crime scene photos of the dead elementary school children in order to “finish off the NRA” once and for all.

While that may have influenced many Americans’ feelings about the gun debate, it would not have been the appropriate move (the 911 tapes from that day are hard enough to listen to). But by creating a fictionalized story with Meryl Streep as a senator who is taking on the NRA, and possibly has had gun violence touch her own life in some way, Weinstein has the potential to move people to action with his film.

And isn’t that what art is supposed to do? Help us confront the issues facing society by driving debate? So far, all Weinstein has done is mention that he’s starting to think about making this unnamed anti-NRA movie with Streep and already it might be the most controversial film of his career.

In case you missed them to first time around, listen to Weinstein’s original comments below, via The Howard Stern Show: