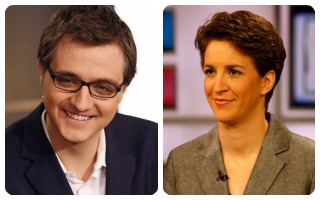 Conservatives should suppress the instinct to dismiss Chris Hayes, the new host of MSNBC’s 8 p.m. programming slot soon to be vacated by Ed Schultz. Yes, Hayes’ addition to MSNBC’s prime time lineup, serving as the lead-in to the left-leaning cable network’s flagship program, The Rachel Maddow Show, signals the network will continue to represent a brand of liberalism well to the left of the American center. It is also a continuation of another trend that should trouble conservatives: MSNBC branded itself both as a sophisticated and academic debate forum in the weekends and they are moving that format to prime time. What’s more, both Hayes and Maddow know how to make an argument that eschews force of personality and rests on data.

Hayes’ weekend panel program, Up, is unlikely to survive in prime time in its present format. Up’s deliberative debate-style construction is simply not going to be competitive in the prime time environment like it is in the early morning hours on weekends. If Hayes follows Maddow’s lead, a likely prospect, MSNBC’s 8 and 9 p.m. blocks will feature two hosts making informed political arguments that they are aware Americans outside of their core audience view with a measure of hostility. In short, both hosts make reasoned, Socratic, and well-supported arguments. It takes talent to do this consistently and make a presentation compelling enough to still draw an audience.

Too often, MSNBC’s largest competitors allow their prime time hosts to make on arguments that rest on the force of personality of the presenter making the case and not the case itself. CNN host Piers Morgan crusades for stricter gun laws undeterred by the evidence of their failure to deter criminal behavior. Bill O’Reilly advocates for an expansion of the war on drugs without addressing the counterarguments which focus primarily on that war’s spiraling costs and diminishing returns. Their arguments in these cases are centered on deeply-held beliefs – not facts. Divergent opinions are often left to their guests to advance, only to be self-righteously rejected by the host.

Furthermore, along with capable and amiable contributors and hosts like The Nation’s Ari Melber and The Cycle co-host Steve Kornacki, MSNBC’s personalities spend far more of their programming time devoted to understanding electoral politics. Demographic voting patterns, the voting history of individual districts, cities and states, polling data beyond the topline results; these and other elements of electoral politics are the only data points that are even moderately predictive of future electoral results.

It is the internalization of this kind of data that allows rank-and-file progressives and Democratic activists to effectively target states and districts in the traditionally Republican-leaning Southwest, for example, while conservatives dismiss the rising Democratic tide in states like Texas and Arizona as a liberal fantasy. It is the abandonment of this study of the science of politics that permitted viewers to cheer on Karl Rove (who knew better) as he battled Fox News Channel’s Decision Desk on election night in 2012.

Of course, some of MSNBC’s most progressive hosts are often guilty of indulging in confirmation bias. Those programs, primarily but not exclusively relegated to the network’s dayside, choose not to make a case and instead berate and mock those who disagree with their unsupported assertions. Contempt and scorn in lieu of an argument is rarely a feature, though, of Maddow or Hayes’ programs. They know how to make valid case for a policy prescription that is buttressed by data. Night after night, they will be arming their audience with indisputable facts designed to advance liberalism.

As always, where there is challenge there is also opportunity. As every conservative knows, the only force that drives positive change is competition – and the right-leaning hosts of cable news will have that in spades come April. Here’s to hoping MSNBC’s programming decision is the beginning of a rebirth of cable news across the board.