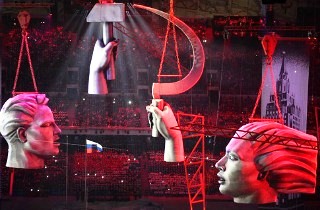 Russia offered up the usual fare for the opening ceremony of the 2014 Winter Olympics in Sochi; dazzling spectacle, mass performance art, and sweeping historical revisionism. The Olympics have always been something of a historical “coming out party” – a debutant’s ball for a rising country or region symbolically announcing its emergence, or reemergence, onto the world stage. The latest was no exception.

During the first Olympics to be located in Russia since the collapse of the Soviet Union, the performance, bifurcated by the parade of nations, consisted of a painfully simplified version of Kievan Russian history followed by an equally glossy account of the Soviet period.

The Olympic ceremony committed many great crimes of revisionism. No mention was made of the moment which most Russian’s view as the birth of modern Slavic culture -– the adoption of Orthodox Christianity by Vladimir I. Save for a passing reference to the Boyar class, there was no great cathartic acknowledgement of the Tartar Yolk. A passing reference to Catherine II made no mention of the Potemkin Villages she erected with the intention of fooling visiting European dignitaries into believing that hers was a great, innovative European state.

This is perfectly understandable. Even a passing reference to that great ruse, consisting of the erection of building facades along the banks of the Dnieper, would only have invited a host of analogies connecting that moment and present spectacle. The Olympics are not an occasion in which a host nation often choses to air its dirty laundry in public. It is, and always was, a grand and forgivable whitewashing aimed at inspiring national pride.

With this in mind, conservative criticism aimed at Russia for acknowledging its 74-year history as a republic within the Soviet Union is particularly undeserved. Some conservatives, perhaps seeking an easier target than Moscow, have hurled barbs at NBC News, NBC Sports, and the personalities who provided color commentary during those opening ceremonies for not criticizing the opening performance more. This, too, is misdirected outrage.

Following the parade of nations, the Sochi opening ceremonies took a turn to the left. After a brief jaunt though Russia’s imperial history, the Bolshevik Revolution -– as depicted by monolithically uniform dancers clad in red wheeling out crimson gears and cogwheels –- took to the stage. This Stalinist interpretive dance was then swept away by a more modern interpretation of Soviet life. This took the form of Komsomol youth scurrying across busy boulevards clogged with traffic representing the Khrushchev’s Thaw and the Brezhnev-era.

Conservatives have been incensed by NBC’s coverage of the games and their host country since they began last week. Bob Costas called the Soviet-era a “pivotal experiment,” resulting in a swarm of angry tweets from those on the right. Anchor Meredith Vieira called the dissolution of the USSR, symbolized on Friday by a little girl letting go of a red balloon, a “bittersweet moment.” This prompted the National Review’s astute political blogger Jim Geraghty to ask if these and other statements were the result of a “health-related mental lapse.”

“The phrase ‘pivotal experiments’ is cowardly in its unwillingness to judge, but ‘bittersweet’ is worse because it’s the inverse, saluting the oppressor and lamenting his departure,” Geraghty wrote.

Most would agree that NBC’s hosts and commentators did not offer a historical counter-narrative to the glossed over portrayal of the bloody and repressive Soviet period. It’s also odd to seek brave historical truth-telling from an organization whose color commentary consisted of comically shallow quips like Matt Lauer transitioning, “Imperialism in Russia is about to be swept away by two important events — the Russian revolution and this commercial break.”

Russia’s checkered past human rights record is matched only by its presently checkered human rights record. NBC is also cautiously not highlighting that country’s draconian anti-LGBT laws or the conspicuous number of journalists who have been killed or gone missing since Vladimir Putin ascended to the presidency. They have a job to do and it is not to shed light on the abuses of a semi-authoritarian state. Furthermore, any contextual reflection on the horrors of the Soviet Union would be underserved without an acknowledgement of Putin’s encouragement of Soviet nostalgia – an important source of internal political cohesion. This is all simply outside the scope of NBC’s mission in Sochi.

Conservatives have gone down this road before. Lauer and Vieira’s color commentary was criticized in 2008 when they declined to highlight the horrors of the Cultural Revolution during the 2008 opening exhibition in Beijing. This, too, was undeserved. Imagine the clamor that would have followed had the opening ceremonies in 1996 been halted so that the commentators could briefly note that the city was the scene of some of the worst abuses committed against African-American slaves in the antebellum South. “Welcome to Vancouver,” Costas could have said in 2010, “where native Americans were forcibly interbred with Europeans in order to destroy their culture.”

The Olympic opening ceremonies are simply not the place for a history lesson. Those who come in expecting anything other than a gauzy misrepresentation of history are destined for disappointment. Similarly, those critics who expect morning television anchors and sportscasters to provide hard-hitting contextual analysis during a grand interpretive dance will be underserved.

There is plenty of room to criticize NBC’s journalistic instincts; actively cutting an anti-discrimination message in order not to offend their host government is an example of perfectly legitimate ground for criticism. But the network’s hosts not aggressively fact-checking a dance over anything other than mediocre choreography is misplaced.

[Photo via screen grab via NBCUniversal]