Norah O'Donnell - We Got Nothing - John Podhoretz
video 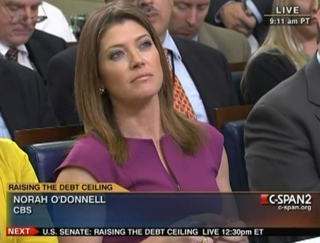 It was a question asked repeatedly during today’s White House press briefing, but some conservatives are lashing out at CBS’ Norah O’Donnell for asking Press Secretary Jay Carney how the Democrats benefit, if at all, from the final debt deal. The controversy began with a post from Commentary Magazine entitled “CBS’s O’Donnell to Carney: ‘We Got Nothing,’” which was technically a correct quote, except Commentary omitted some key words preceding that statement: “You have Democrats saying…”

The ball that O’Donnell had let slip she was on Carney’s team with inappropriate pronoun use began rolling at Commentary and took flight on the Twitter account of John Podhoretz, who tweeted out the story asking for an explanation. The post described O’Donnell’s questions as “terse and accusatory,” adding that the “we” was very telling and removing the key “Democrats are saying” portion of the quote. Those who were in the room immediately rose to their defense– ABC’s Jake Tapper pointed out the misquote and called the attacks “scurrilous and false.” Conservative columnist Stephen Hayes lamented that “phony claims of media bias undermine real ones,” and this was the case here. The New Republic penned a piece in her defense, simply calling the attack “amazing.” Podhoretz responded to both: “Fine. We can amend. But your facts do not jibe with the reality of what happened. She wasn’t quoting. She was representing.” The story bounced around in the blogosphere, with the video and post popping up at Big Journalism and the Media Research Center, whose video was used.

Meanwhile, O’Donnell herself has kept mostly quiet, thanking those on Twitter that corroborated the validity of her original quote and telling our White House Correspondent Tommy Christopher,”I know he must have just misheard. And I trust he will correct it.”

It seems both Seth Mendel, who authored the original Commentary piece, and Podhoretz have heard the complaints from those who were there and are not entirely ceding the point. On his part, Podhoretz responded to Tapper’s and Hayes’ allegations, noting that the post has been corrected, but arguing that the missing text doesn’t take away from the bias, as the “some say” is, to him, a common journalistic tool for masking bias. Mendel’s update takes a similarly strident tone, noting that O’Donnell’s tone was “hostile and dramatic” enough for them to conclude she was speaking in her own voice, despite the fact that the quote in question is preceded by “Democrats are saying” (words that was only added to the post upon a second update, for which O’Donnell thanked the magazine):

If you watch the whole clip, she asks a question before this statement that is clearly in her voice, not that of agitated liberals: “Two weeks ago the president talked about shared sacrifice, and he talked about ending subsidies for oil companies and he talked about ending tax breaks for corporate jet owners. He talked about that this was a very fair deal where he was offering three-to-one, spending cuts for one in tax revenues. Where are the tax revenues?” She then asks the question where her defenders insist she is quoting others. Watch the delivery of her question–it’s both hostile and dramatic, and was made only after questioning Carney along the same lines in which there is no contention that she is speaking for anyone other than herself. Viewers can decide.

Update: Podhoretz has penned a response to the controversy at Commentary, where he reiterates that the point stands because O’Donnell’s mannerisms and tone of voice give away what they were perhaps incorrect in identifying in the text:

But what Seth perceived and what I perceive in O’Donnell’s words (discernible in the 45 seconds before she said the words that we made controversial) is the revelation—through tone and comportment—of her own view. This is something to which I, as a conservative member of the media and watcher of media for three decades now, have long since been hypersensitive. The raised eyebrow, the cynical half-glance, the ironic turn of phrase, some inappropriate anger—these are all behavioral cues that reveal a supposedly objective reporter’s true feelings and in which they unconsciously express their ideological fealties.

While Commentary (and main player in this controversy, Podhoretz) don’t seem to be backing down completely on their claim, they have at least modified it to acknowledge that O’Donnell did not chastise Carney from the position of a disappointed progressive, but rather paraphrased the sentiment. Their claim that O’Donnell’s general attitude was enough to prove she agreed with the sentiment she echoed is neither here nor there– it’s a good rule of thumb in journalism that what your gut tells you about someone’s innermost feelings generally does not make for a good media criticism post.

Below is the video of the exchange in question between O’Donnell and Carney via C-SPAN, and the transcript, and the beginning of the controversial sentence gets a little lost in crosstalk:

Carney: Because it significantly reduces the deficit. It significantly addresses some of the drivers — or will address some of the drivers of our long-term debt. And if you’re asking, “Does the government continue to function and does — do we still owe — do we still have to borrow money on — to pay our bills?” yes, that has not been eliminated. We will continue to have a debt. The point is — economically, is to begin to get the growth in our deficits and the growth in our debt under control, and that is what this agreement begins to do very significantly. Will all the work be done? Absolutely not. That’s why the joint committee’s work is so important. And I’m sure even as that occurs and takes place, there will be more work that is necessary. But this is significant and it should not be discounted. I mean, it’s a little — not — the ink hasn’t even been printed on the paper yet, let alone signed into law, and we’re already talking about how it’s not substantial enough or what the next step is.

I think we ought to all take a step back and remember where we were 24, 48 hours ago, a week ago, two weeks ago, the prospect that was hanging out there that America would not honor its obligations for the first time in its history, and the impact that would have on our economy and the global economy, and the fact that, while I got a number of questions, understandably, during briefings in recent days and weeks about why we were optimistic that we could reach a bipartisan compromise because it looked so unlikely — the fact is here we stand today, less than 24 hours after that compromise was reached, anticipating votes in both houses of Congress that will achieve something rather significant. Yes, that’s a victory for the American people.

Carney: Well, Norah, I think we just addressed this, but I’ll be happy to do it again.

O’Donnell: …Democrats saying he gave them everything they wanted and we got nothing.

Carney: Norah, I feel like I’ve taken this question two or three times already and I’ve been very clear about how that’s not the case, and, in fact, we had — we’ve got significant achievements.