Conspiracy! How The Simpsons Predicted 9/11 And Saved Us From Another Catastrophe! 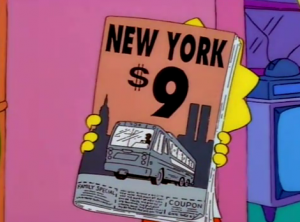 Conspiracy theories have something for everyone. For some, these theories, disturbing as they are, are almost comforting in that they seem to show that, however chaotic things get, there’s actually an order to the madness and, even if the people in control have sinister intentions, we can stop them if we just pay close enough attention to the clues. For others, these theories are great because they’re hilarious and sometimes involve reptile people! A new theory gaining traction and being reported by the New York Observer certainly fits into both categories. It proposes that The Simpsons predicted the 9/11 attacks and not just because the show began to get terrible right around the time of that terrible event.

The theory centers around the 1997 episode “The City of New York vs. Homer Simpson,” which has a scene in which Lisa holds up a magazine ad in which the number “9” is prominently displayed next to the World Trade Center towers which look like the number “11.” Spooky, right? That’s not it! The Observer also explains how some believe that the popular cartoon saved us from another attack:

“According to Nicholas West, of activistpost.com, ‘The Simpsons’ May 2 episode, entitled ‘To Surveil With Love,’ appears to contain a warning of a “false flag” attack—a covert operation in which a nation attacks itself to manipulate public opinion (in this case, presumably as a prelude to martial law, one-world government and the End Times). The planned attack, a nuclear explosion, was apparently set to happen last weekend, on Saturday, November 6. Fortunately, it was discovered in time and publicized on the web, which caused the chastened plotters to call it off…for now. (Next time maybe they’ll wise up and stop planting clues?)”

Now, this isn’t as crazy as it sounds! As we all know, The Simpsons is written by mostly Ivy League students and the Ivy League is filled with the rich sons of the Shadow Government’s most powerful men. Even the comedy writers at Ivy League schools are actually involved in secretly manipulating the country (for more info on this, see my extensive data that proves the National Lampoon’s 1964 Yearbook totally warned about Waco). But really, if the Simpsons has been trying to tell us of coming atrocities, it only follows that Conan O’Brien, former Simpsons writer (and Harvard student!) is trying to warn us as well. No wonder NBC tried to get him off the air. Especially when the opening sketch from his new show was obviously only a coded message to us explaining how the time machine was already invented by Larry King who was actually assassinated years ago only to be replaced by a clone. Trust me, it’s all there.

Really though, all this conspiracy talk is tiring me out. Below I’ll leave the video of the two Simpsons scenes in question (explained in the only way our nation’s truth seekers know how; through text narration and spooky music) and let you debate them as well as some other chilling clips that predicted other disasters. Me, I’ll just be relaxing and waiting for some rational conversations.

Oh! This afternoon is the next Glenn Beck puppetmaster episode!