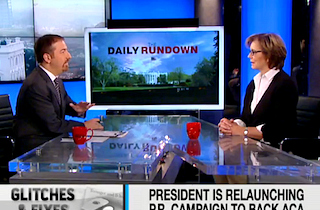 Consumer Reports had earlier told its readers not to even bother with the website through the first month, a provisional verdict it later said had been misrepresented.

“Now we’re saying, ‘it’s time,'” Metcalf said, in particular praising the new window-shopping function, in which users can peruse health plans without registering with the site. The requirement to make an account before viewing options was considered one of the main causes for the site’s initial traffic bottleneck. “It’s terrific, I’ve tried it, it was working yesterday through the busiest times,” Metcalf said.

Metcalf stopped short of saying the website was fixed, noting that she was endorsing using it in the context of the short window customers have to access the site, and, more importantly, the subsidies available through it, in order to purchase insurance that takes effect on January 1. Metcalf warned that consumers had no control over the back-end problems, which are giving inaccurate information to insurance providers, and said that if you enroll through Healthcare.gov and don’t hear from your new provider within a week, your best bet is to contact the insurer directly.

She also advised consumers who had created accounts to abandon the old efforts and “start over,” as many earlier were stuck on glitches that had since been repaired, and would be more trouble than they were worth to retrieve.