Cornel West On CNN: Herman Cain Needs To ‘Get Off The Symbolic Crack Pipe’ 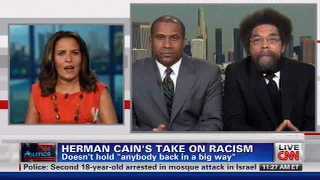 On Monday’s CNN Newsroom with Suzanne Malveaux, Cornel West slammed Herman Cain‘s comments that racism didn’t matter that much, saying the Godfather’s Pizza CEO should “Get off the symbolic crack pipe and acknowledge the evidence is overwhelming.”

“Black people have been working hard for decades,” West, a professor at Princeton University, said. “I think he also knows that if brother Anthony Davis, a brother who was just put to death, were a white Wall Street banker brother, that the response in the nation would have been very different as opposed to being a poor black brother. That’s just one small example, one very small example of racism still at work holding people back.”

West added that Cain was exhibiting “mean-spiritedness toward black people fighting for their lives in this ugly economy.”

Tavis Smiley also disputed the validity of Cain’s comments, saying “There’s no comparison in history for any president that’s had a budget the size of the Secret Service budget now just to protect Barack Obama and we’re talking about whether or not he has a point about racism in America.”

Cain had earlier told Candy Crowley, “I don’t believe there is racism in this country today that holds anybody back in a big way. Is there some… are there some elements of racism? Yes.”

Watch West’s interview below, via CNN: