Cornel West On CNN: Obama’s Drone Policy ‘Makes Us the George Zimmerman of the World’ 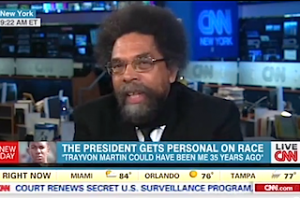 Cornel West appeared on CNN this weekend to offer his reaction to President Obama‘s landmark speech on race and the George Zimmerman trial. While West could admire the “powerful, personal story the president shared with America, he used the speech to criticize the administration drones policy, which, by killing innocent civilians he said makes the United States “the George Zimmerman of the world.”

West was ostensibly reacting to Obama’s discussion of controversial Stand Your Ground laws and their relation to race. The Princeton professor said he was “glad” the president brought up this specific issue, praising him for saying “we must never kill innocent people in the name of self-defense. But then I thought about our drone policy, which makes us the George Zimmerman of the world in terms of killing innocent folk in the name of self-defense.”

In context of the Zimmerman case, he said Obama was right. “Self-defense must never be used as a way of downplaying the precious lives of innocent people.” But he said he was “dissatisfied” that the president only addressed the issue at the state level and not at the federal level.

“The personal will not be enough,” West said of Obama’s words. “We need policy and we need some serious truth-telling about our racist criminal justice system.” He hit Obama for saying the Zimmerman jury was right in their assessment when it was in his eyes a “racist verdict.”

“I applaud his words,” West concluded, “but I’m still waiting for action.”

As recently as this month, West was calling Obama a “war criminal” on Real Time with Bill Maher for killing innocent children with drone strikes abroad.