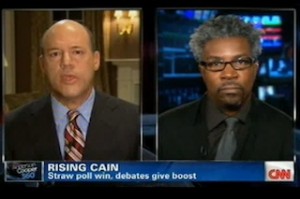 Godfather’s Pizza magnate Herman Cain is having a moment, albeit a weird one, in which he has leapt into a statistical tie for 2nd place in the GOP primary race following a crushing victory in the Florida straw poll, but is also drawing fire for a perfectly-timed media byte in which he says African Americans have been “brainwashed” into voting for Democrats. On Thursday night’s AC360, former Bush spokesman Ari Fleischer and Democratic pollster Cornell Belcher debated Cain’s ascent, and that inflammatory remark.

Anderson Cooper begins by asking if Cain’s current afterburn is sustainable. Fleischer pointed out that running a close third at this point is a good position to be in, in case either frontrunner stumbles. That has already happened, arguably, as Rick Perry has fallen from a double-digit lead over Mitt Romney, into a virtual dead heat with Cain for second place, all in the space of a week. Their respective momenta might carry each candidate further along these trajectories, as things haven’t gotten any better for Perry.

But will Cain’s remarks kill his rapid ascent? Cooper asked Belcher if there was anything to Cain’s claim that he could pull about a third of the black vote. “A great way to sort of get people on your side and win voters is to attack their intelligence.,” Belcher said, “So great job there. Really sensible, Herman Cain.”

He then issued a rather scorching media critique, challenging CNN (where Cain made his statement) and other media outlets to stop having Cain on. “If I came on your show, Anderson, and I said, all Jewish people are brainwashed, I probably wouldn’t be invited back to CNN, and I assure you the condemnation would be swift, and it’d be powerful and be strong.”

Cooper tossed the question to Fleischer, who channeled his inner 90s Jerry Springer guest, saying, “Anderson, I’m not, I’m not even going there.”

He tried to focus on Cain’s electoral prospects, hindered by a perceived lack of credibility, and a lack of political experience that appeals to voters on one hand, but disqualifies him, to some degree, on the other.

Belcher continued to press Fleischer on whether he would condemn Cain if he had said the same thing about Jews.

Cooper, playing devil’s advocate, asked if Cain’s remarks could be cast as a comment on a voting bloc, rather than a racial commentary. “Don’t people often say, though, well, liberals think this, or… I mean people make vast statements about groups all the time…  independent voters think this.”

Cooper’s premise misses the point, though, that Cain’s statement wasn’t an observation of trend data among a voting bloc, but rather, a blanket theory as to why that racially defined bloc votes the way it does. Such a postulate about “independent voters,” or “liberals,” for example, wouldn’t carry the same level of offense because, as Belcher points out, those groups haven’t been historically marginalized because of those identities.

Fleischer tried to justify Cain’s comment because it was based on the accepted premise that 90-95% of black people vote the same way, then added, “when people start throwing the word ‘racism’ around that’s when I end the conversation because you cannot have an intelligent conversation when people are accusing people in the public square of that.”

The heated conversation continued along those same lines, with Fleischer toeing the conservative line that discussions about racism are the real problem, not the racism itself, and Belcher pressing the “double-standard” he described earlier. Cooper finished by noting that Cain would be participating in a CNN debate in a few weeks. “Let’s see if Herman Cain gets some questions on that,” he said.

On the nature of Cain’s comments, I think Belcher is essentially correct, that the “brainwashing” charge is degrading, and its application to black people is legitimately offensive. The charge of “racism,” though, is complicated by some context that I haven’t heard anyone discussing.

Black conservatives like Herman Cain and Rep. Allen West, who has also made racially offensive statements about the “Democrat plantation” and his role as a modern Harriet Tubman, aren’t making these comments in a vacuum. They are routinely attacked along racial lines, as “sell-outs,” or as far less polite variations on that theme. That doesn’t make Cain’s, or West’s, statements less offensive, but their position on the racial playing field makes them something other than “racists.”

Belcher hits on something important that people ought to keep in mind when they attack Cain, or other black conservatives, as “tokens” or “Uncle Toms.” He told Cooper and Fleischer, “Well, historically, you know, once upon a time African- Americans overwhelmingly voted Republican when they in fact could vote. So you’ve got to understand that African-Americans make policy decisions and they change — using reason, it’s not — it’s not about brainwashing.”

Perhaps black conservatives use similar faculties – right or wrong – to shape their own beliefs, and not the promise of advancement through tokenism. If Cain’s attack on black voters is illegitimate, then mustn’t the “Uncle Tom” construct advanced by the likes of Janeane Garofalo also be illegitimate? Whether or not some sort of racial vindication plays a part in their appeal to conservatives, they are owed the respect that their beliefs are sincere, just as those 95% of black voters are owed the presumption that they can think independently.

Here’s the clip, from Anderson Cooper 360: