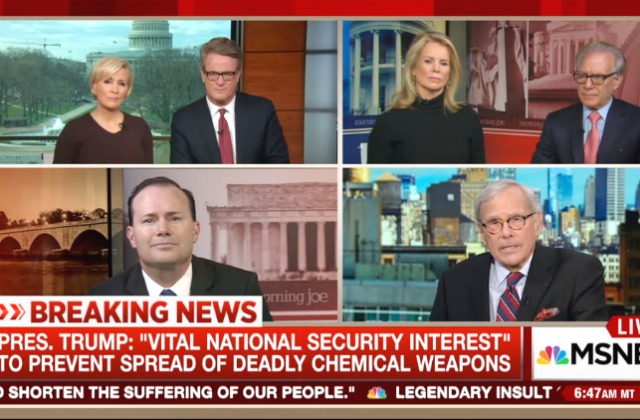 Having the painful task of watching some of Morning Joe Friday morning, it was as if the last 14 years never happened, and that there was never an Iraq War. “The strong impression is this can not be a one-off after this despot has been doing this kind of work in his country for a long, long time,” corporate media legend Tom Brokaw casually said.

Umm, who is giving off that strong impression, Tom? You!

Brokaw went on to ask Senator Mike Lee what the “tone” would be if President Trump comes to Congress and wants to “kick start” the war in the Middle East. (Of course it’s less than 24 hours after the airstrikes and the media is already suggesting war as an option.)

“Then you think about what follows next, and to be successful you’re probably going to have to put more boots on the ground again and engage on very tough terms with Russia, which has been defiant today,” Brokaw continued, concluding that the question is what happens to Assad.

No, the question is — one that schmucks like this never seem to ask —  is who takes power after Assad? The rebels that are majority jihadists? Have we not learned that simply toppling one despot and inserting another (i.e. Libya) isn’t exactly wise?

So, in less than 24 hours, Brokaw cheer-leaded for potential war and increased ground troops, and there were, of course, other anti-war panelists to give an opposing view in order for the audience to not simply be hammered over the head by the war machine, right?

Morning Joe had on Lee, who objected to Trump’s actions not based on the merits, but because he didn’t consult Congress beforehand. But the aforementioned Ignatius topped Brokaw’s recklessness with a question so devoid of any understanding of what war actually means it was nauseating.

“Does the president have an opportunity here to open up, and in effect, restart with the American people, with a Congress that’s been so divided?” Ignatius asked Senator Lee. “Is this a moment to build on and how should he do it?”

Earth to old dinosaur “journalists” from The Washington Post! Discussion about whether to escalate military involvement and possibly begin World War III is not part of the daily “horse race” you and your ilk obsess about. It’s not a PR or rebranding opportunity for a president to get some type of second chance with the American people. It’s serious business that has the potential to get people killed, cost America trillions of more dollars (we’ve dropped a cool $6 trillion on Iraq and Afghanistan), and further starve our cities and people of much needed investment.

Brokaw and Ignatius are just two of the most cringeworthy. Cable and print news have been humming along all day crediting Trump, offering the play-by-play for his airstrikes, and playing the “what now” game.

Missing are any voices or analysis on whether this escalation is a mistake, or not-well-thought-out, or repeating the same mistakes of Iraq, Afghanistan, Libya, and more.

And what will be the result? Americans who consume corporate and legacy media thinking the only solution is ground troops, more airstrikes, and war.