Cory Booker To Leno: Obama Was ‘The First Person’ To Defend Me After Bain Remark
video

Cory Booker To Leno: Obama Was ‘The First Person’ To Defend Me After Bain Remark 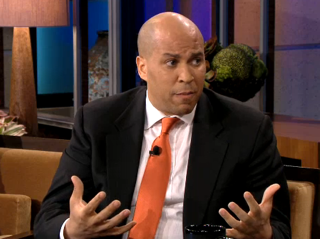 Newark Mayor Cory Booker swung by The Tonight Show last night, having much to chat about with Jay Leno. Among the many topics was Booker’s comment about his opposition to attacking Mitt Romney‘s success at Bain. Booker stuck with his take and noted that, in the midst of that firestorm, the first person to call and offer support was President Obama.

Leno opened up the topic about Booker’s stint on Meet The Press where he called attacks on Bain “nauseating,” and Booker explained that “the reaction after the show, to be really 100% sincere, my biggest concern was my President.” Noting that he was friends with the President long before he was president, and thus was one of the first Democrats in his region to endorse him over Hillary Clinton, he said the comments did not hurt their relationship. “He was incredibly gracious in the things he said about me… he was incredibly kind, and that’s the shame about the kind of politics we’re in– people often miss the essence of a man.” Booker added that President Obama was a “good person” and “the first person to step forward and say ‘hey, you’re my friend, we all say things that don’t come out as we mean them, and I’m still with you.'”

Booker also talked about the time he saved a woman from a burning building (“We made it out of a situation that we really shouldn’t have made it out of.”) and the comic sketch he starred in with Governor Chris Christie, which he said was “absolutely” Christie’s idea. As for the latter’s vice presidential prospects, Booker said, “He’s a soft-spoken guy, you’re going to have to ask him.”

The interview, via NBC, below: