Cosby Accuser Fires Back at Whoopi Goldberg: ‘He Raped Me’
VIDEO

Cosby Accuser Fires Back at Whoopi Goldberg: ‘He Raped Me’ 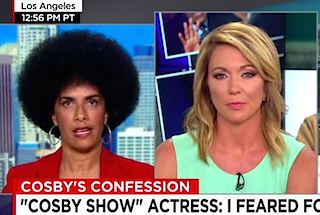 On two consecutive mornings this week, The View’s Whoopi Goldberg made it clear that she is standing by fellow comedian Bill Cosby despite the emergence of new court documents in which he admitted to procuring drugs with the intention of giving them to women.

“He has not been proven a rapist,” Goldberg said of Cosby. The following day she added, “It’s my opinion, and the American courts agree with me because still he has not been taken to jail or tried on anything. So back off me!”

Now, CNN’s Brooke Baldwin has given one of Cosby’s many accusers a chance to respond to Goldberg directly. And what she said could make The View host think twice before she continues to speak on Cosby’s behalf.

While Lili Bernard said she has “utmost respect” for Goldberg, she wanted her to know that what she endured was “no bull by any means.”

“He surreptitiously, clandestinely slipped drugs into my blood and he raped me,” she said. “Because he incapacitated me, I was not even able to push the pillow away from my face that he was using the silence my screams — he was suffocating me while he was raping me.”

“This is real, this is what I experienced,” she added. “It was very violent. And if and when I’m called to testify under oath, I will present all the details along with evidence and contact details of third-party witnesses.”

But in Goldberg’s view, the more than 40 women who have accused Cosby are simply trying to ruin his “reputation.”