Could Al Gore Challenge Hillary in 2016? Mark Halperin Thinks So 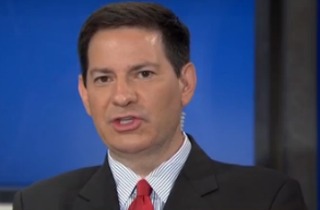 There’s a lot of media speculation over likely 2016 contenders on the Republican side, but what about the Democratic side? Hillary Clinton‘s all but the anointed nominee at this point, but Mark Halperin shared an odd, out-of-nowhere theory about who could pose a serious challenge to her in the upcoming election: Al Gore.

Halperin really thinks if Gore runs in 2016, he has a serious chance of not just being a strong liberal challenger to Clinton, but actually winning the primary race. The others on the Morning Joe panel, of course, had to ask: is this based on anything he’s heard or anyone he’s talked to.

Halperin insists that no one’s talked about Gore 2016 to him, but said he “has a better chance of beating her for the nomination than any Republican today has of beating her in the general election.” And while Clinton is vulnerable, “she’s not vulnerable to Bernie Sanders” and only a strong player like Gore could pose a real threat.

And on Twitter yesterday, Halperin made the case for why:

So who is the 2nd most likely person to stop @HillaryClinton from being the next POTUS? It isn’t a Republican.

It is someone who supports single payer, came out for same-sex marriage long before HRC did, & has deep ties to the enviro movement.

He’s got as much nat'l campaign experience as anyone alive, a potent $ network, ties to Silicon Valley & Hollywood, & could self fund a bit.

He knows how to mess with the Clintons’ heads & he understands the media. Plus, he’s unbound, unplugged & won the national popular vote.