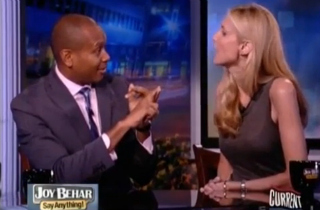 Want to take a guess how this one unfolded?

It wasn’t too pretty. By the end of the segment, Powell was calling Coulter a “homophobic, anti-Semite, racist,” while a clearly angered Coulter called him a “moron.”

Things began to get heated towards the end of the segment when Powell let loose how he really feels about Coulter’s successful book career:

“I think that Miss Coulter to my left plays the race card for every book. It helps to sell books, puts her on the New York Times bestseller list. But my thing is as someone who works in this country, has traveled to almost all 50 states, and is about bringing people together no matter what their race or culture.”

Coulter interrupted Powell to say, “Yes, by calling me a liar without naming what the alleged lie is.”

“What you don’t want to deal with is that you are one of the people who helps to divide people in this country,” Powell shot back through the crosstalk. “Do you want to bring people together or do you just want to sell books?”

“You know what I want to do more than anything? I want to keep trying to talk and being talked through,” Coulter snarked. “So I have just achieved my goal! I would like to be talked over for an entire segment.”

Behar advised the two to stop bickering and discuss the issues at-large, reminding them of a recent George Will quote in which the conservative columnist wrote that “Obama would be losing if he weren’t black.”

Powell related it to Coulter’s book: “It speaks to the racial problems in this country, the racism in this country which is not dealt with accurately in her book because she’s making stuff up.”

“This from a child pornographer,” jokingly replied Coulter.

After Behar scolded to her to “stop that,” Coulter replied: “No, not if he’s going to keep calling me a liar without naming a lie.”

“To say that racism doesn’t exist in this country is an outright lie,” Powell said.

“I didn’t say that,” rebutted Coulter. “I was very clear about that. That was the whole child molester thing. Let’s roll it back,” referring to earlier in the segment when she clarified that there are simply bigger problems than racism, but media chooses to highlight race issues as the biggest.

Behar reminded her that she had said racism exists less today, so Coulter explained:

“Okay, I did say it’s less. Then when you say it’s a lie, say, ‘When you say there is less racism in this country, that’s an outright lie.’ And tell me it’s the same as back in Selma. Tell me that.”

An astonished Coulter fought with Powell for a bit over this statement, with him insisting that she’s a wealthy white woman from Connecticut who hasn’t lived in black-Latino neighborhoods. “Okay, there we go. If that’s the lie, I’ll take that,” said Coulter.

BEHAR: I have to go, as much fun as this has been.

COULTER: Yes, it’s been fantastic. I’ve never been on with a child pornographer.

POWELL: I’ve never been on with a homophobic, anti-Semite, and a racist. Clearly you’re a racist.

COULTER: You’re clearly a moron. But thanks, this was great.

Watch the verbal spat below, via Current TV: