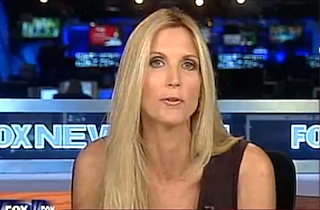 Conservative pundit Ann Coulter savaged the gang of eight’s immigration reform bill on Fox News Saturday morning, framing the legislation as a bait-and-switch by the Democrats to admit millions of new voters under the auspices of reforming the broken immigration system.

“This is devastating for the Republican Party,” Coulter said, noting that following Ronald Reagan’s 1986 amnesty bill, the GOP’s Hispanic support “plummeted” from thirty-seven percent to thirty percent, and shortly thereafter the last statewide Republican official was elected in California (though Proposition 187 probably had something to do with that).

Coulter impugned the speed with which Harry Reid is attempting to pass the bill through the Senate. “This is the way the Democrats always hoodwink, always snooker the Republicans,” she said. “The better path has always been, let’s think about this. Let’s see what’s in this 1,000 page bill. I mean, this is another Obamacare-type bill, where people don’t know what’s in it. A real immigration bill could be about one page long: enforce e-Verify, build a fence.”

“It’s striking that Republicans, including Marco Rubio, don’t support such amnesties when they’re running for office,” Coulter said. “Oh no, somehow it’s once they get to Washington they discover all these unknown bounties for Republicans in amnesty.”

Watch the segment here, via Fox: