Coulter Bashes Liberals Over Immigration On Fox: They’re Back To ‘Old Tricks And Trying To Release Criminals’
video

Coulter Bashes Liberals Over Immigration On Fox: They’re Back To ‘Old Tricks And Trying To Release Criminals’ 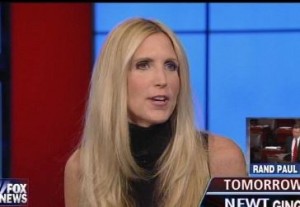 Ann Coulter sat down with Sean Hannity tonight to talk about new Republican proposals on immigration reform, especially in the wake of comments made by Jeb Bush this week. Coulter and Hannity agreed that any GOP plan needs to prioritize border enforcement first before getting around to the millions of illegal immigrants already in the United States. Coulter said that liberals who want to start with legalization are going back to their “old tricks and trying to release criminals.”

Hannity said that the borders need to be secure and once they get secured they should get a “seal of approval” by Republicans. Coulter hit the media for convincing Americans that building a wall is crazy, like “sending a man to Mars.” She explained that any plan needs to be enforcement first, and liberals wanting to deal with legalization first are going back to their “old tricks and trying to release criminals.”

RELATED: Touré On GOP’s Immigration Debate: ‘Just Lining Up For Who’s Going to Lose To Hillary’

Hannity asked Coulter if the Democrats are viewing this from a prism of electoral politics and hoping fighting for immigration reform will get them more support. Coulter agreed, and briefly tussled with Hannity over whether the proposal offered by Marco Rubio puts legalization before enforcement. Hannity insisted it does not, while Coulter said “step one is illegal immigrants are legal,” and they can’t start from that.

Hannity highlighted how Obama has continued to demagogue the GOP, though he did acknowledge the Republican party currently lacks some degree of “message discipline.” Coulter said that every time a Democrat says that a policy or law is “common-sense,” Republicans need to “nail the Democrats down” and call them out on exactly what they mean by that.