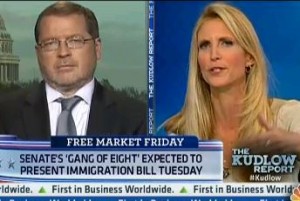 Ann Coulter and anti-tax advocate Grover Norquist got into a heated discussion on CNBC’s The Kudlow Report on Friday over immigration reform. Norquist made the economic argument in favor of immigration reform, while Coulter said immigrants rely too much on the welfare state and would not give back to the economy. She told Norquist that allowing immigrants into the United States doesn’t benefit average Americans, just businesses that “benefit from slave labor.”

RELATED: Malkin Goes Off On GOP For ‘Receding From Post-9/11 Mentality’ That Illegal Immigration Is Nat’l Security Threat

Norquist touted that immigration reform is now being backed by many small businesses and people on the religious right, because they recognize immigrants “are an asset to the country and they help make us stronger, they make us grow faster.” Coulter said immigration should be fixed, but that the United States can’t be bringing in immigrants only to have a significant number of them on welfare, and it would damage the “servant class” in America.

Coulter argued that the U.S. economy needs more skilled and more educated workers as opposed to “cabbage-pickers.” Norquist allowed that it’s important to have high-skilled immigrant workers, but the U.S. also needs guest workers, and he found it odd that conservatives would be using a liberal union talking point that “more people somehow reduce wages.” He said, “People are an asset, not a liability.”

Coulter accused Norquist of arguing against a “strawman,” but when Norquist attempted to respond, Coulter told him to “be quiet” and kept going. Norquist eventually responded by citing studies saying that immigrants would be a boon to the national economy. Coulter shot back that it’s only a boon to people who “benefit from slave labor,” telling Kudlow and Norquist that they keep throwing out studies in the same blasé way liberals do on gun control.

Watch the full segment below, courtesy of CNBC: