Coulter Defends Christie To Hannity: People ‘Lie’ About Him To ‘Make Him Seem More Liberal Than He Really Is’ 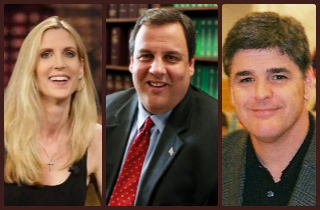 As Hannity playfully teased Coulter about an unnamed guest of hers that “wants to marry her,” the conservative author jokingly responded: “I’ve told you before: I have eyes only for Chris Christie.”

“Your buddy Chris Christie is out there sucking up to Obama this week,” Hannity replied. “Don’t defend him.”

Coulter was unmoved. “There seems to be a concerted movement by both liberals and conservatives to lie about Christie and make him seem more liberal than he really is.”

Hannity rebutted that the NJ governor has “sucked up” to the president this week by praising his fulfillment of promises following last fall’s destructive Hurricane Sandy.

“He clearly said, ‘I disagree with 95-percent of what this president does, but as far as the Sandy cleanup, he has kept his promises,” Coulter shot back.

Coulter has had a back-and-forth relationship in her view of Gov. Christie. She’s taken heat from fellow conservatives for supporting the governor despite his more liberal stances on issues like gun control, and his open embrace of the president following Hurricane Sandy. In a recent Fox News appearance, Coulter reaffirmed her desire to see Christie run in 2016, contrasting him against the likes of Sen. Rand Paul (R-KY), whom she said wants “legal pot and amnesty for illegals.”